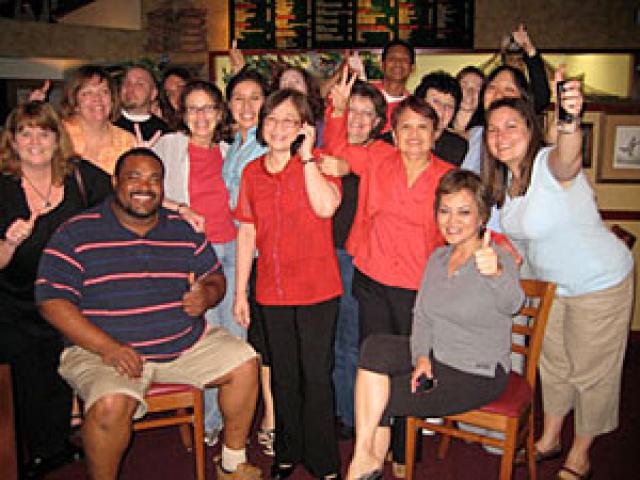 While most Texans are mourning the Texas Longhorns’ loss in the NCAA basketball tournament yesterday, nearly 300 nurses in Houston are celebrating their own enormous victory. The registered nurses at Cypress Fairbanks Medical Center are the first private sector nurses in the Lone Star State to win collective bargaining rights. They gained their voice on the job March 27 and 28 by voting for the National Nurses Organizing Committee (NNOC) Texas, an affiliate of California Nurses Association/NNOC.

Says Josie Jupio, an RN at the hospital:

Finally our voice will be heard. This victory of the nurses’ unity will bring a change for the better, impacting patient care, improving the benefits and assuring an open door policy that is fair to all.

changes the face of healthcare in Texas and will send shockwaves across the country, especially in states where no or only a few RNs are represented. It sends a clarion message to those RNs, a hope that they too can overcome the odds and band together to improve the quality of care at the bedside and change forever the standards for themselves and their colleagues.

Texas RNs have crossed a historic bridge and will never look back.

CNA/NNOC leaders say the nurses at Cypress Fairbanks, part of the Tenet Healthcare system, will inspire other nurses to seek a union. NNOC Texas already is helping workers in at least five other Texas cities form a union.

The Texas win comes as 4,000 CNA/NNOC members are on a 10-day strike at hospitals owned by Sutter Health in the Bay Area, seeking safe staffing levels. The nurse-patient ratio is a key concern of the Houston nurses as well. Says Cypress Fairbanks RN Purita Reyes:

Union means unity for the good of all, especially our patients who are the cause we are here for.

RN Chris Williams, noting the election came one week before the 40th anniversary of the assassination of Dr. Martin Luther King Jr., says the civil rights movement and the union movement are the nation’s “two most progressive movements.”

We nurses at CyFair will try to expand upon [Dr. King’s] vision with respect to patient care in Texas.

NNOC Texas and its allies have mobilized more than 2,000 activists to push for legislation to establish minimum nurse-to-patient staffing ratios, based on a California law where the ratios have improved care and helped reduce the nursing shortage, and establish legal protections for nurses’ ability to advocate for patients. NNOC Texas has held major rallies for the bill on the steps of the Capitol in Austin and outside the Alamo in San Antonio and hosted workshops across the state.

Texas RNs  have shown courage and determination to fight for their rights and their patients. Their commitment helped lay the groundwork for tonight’s breakthrough victory for safe patient care and RN power in Texas, and for many more such victories to come.

The win last week grew out of the strong support the CNA/NNOC provided in 2005 when hundreds of the union’s members from around the country came to Houston to provide disaster relief in the wake of Hurricanes Katrina and Rita, union leaders say. Following Katrina, CNA/NNOC members formed the largest support group of RNs in the relief operation at the Astrodome.

The Cypress Fairbanks story was written in the Astrodome, on the steps of the Capitol, in education workshops, in gatherings of nurses at their homes and in hospital break rooms, in nurses throughout Texas meeting each other and understanding how collectively they could transform the state and themselves.