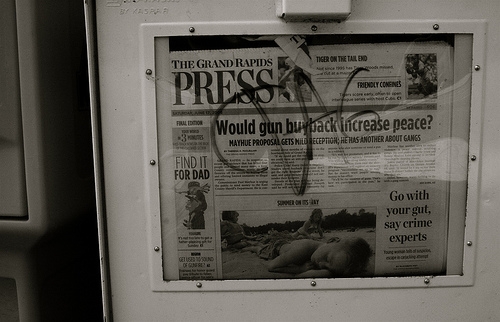 Acknowledging that “citizen journalism has forced news organizations to
change the way they do business,” news site OnMilwaukee.com announced
last month it would invite readers to launch their own blogs on all
things Milwaukeean. So how are they faring? Ironically, publisher Andy
Tarnoff predicted the news site’s biggest problem in his inaugural
article:

There’s only one problem: with millions of random blogs floating around out there, how do you fight through the clutter?


Despite its forward-thinking aims, OnMilwaukee.com has yet to solve the problem.

Blogs are cordoned off in the Reader Blogs section, not integrated into
the site by topic, and their quality is variable at best. Organized
chronologically, untouched by editing, nothing separates the wheat from
the chaff, and mucking through the blogs can get tiresome.

Can you believe all the snow we have already Yuck….. we got way to much to soon.


OnMilwaukee’s dilemma highlights the next challenge in open content:
plucking useful, relevant information from of the user-generated pile.
So how does a blog become journalism? By getting organized.

Human minds categorize and judge sensory information to make sense of
the world; web-based systems are now doing the same. The old navigation
conventions of tabs and category lists are still useful, but don’t
scale or self-propagate.

The most innovative web tools visually organize content so that users
can make sense of the internet. Google and Digg create hierarchies that list value in
descending order, and Technorati has
learned from Google’s algorithm to tell users which blogs have the most
links-and thus authority. Some citizen journalism sites are starting to
do the same. Newsvine ranks content from
users and traditional media sources by reader votes, and GroundReport’s headline order is based
on ratings of its exclusively user-generated content.

OnMilwaukee may not be there yet, but it’s headed in the right
direction. When all the components are in place-not just the content,
but also an effective way of navigating it-there could be something
worth celebrating.