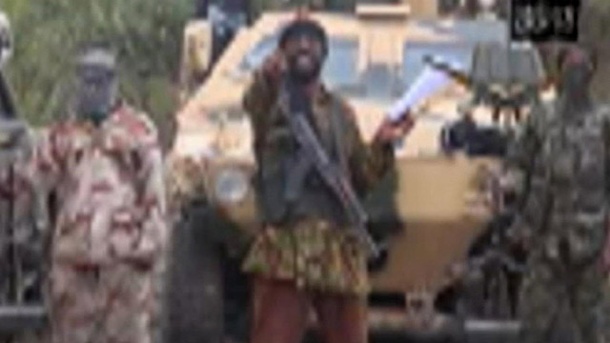 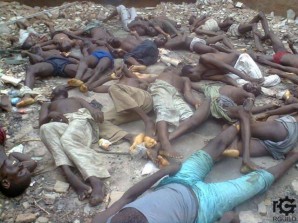 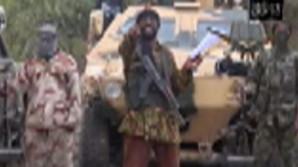 On May 8, 2014 Rep. Jackson Lee of Texas asked for and was granted permission to address the United States House of Representatives for five minutes regarding the kidnapping of girls in Nigeria:

“Mr. Speaker, among other challenges in this world and in this Congress, Nigeria faces a killing machine. In the last 48 hours, again, Boko Haram struck and killed 300 people. This killing has been going on for a minimum of 5 to 10 years.

Yesterday, five Members–five women of the United States Congress held this sign to indicate that we, as mothers, grandmothers, aunts, and those who care about children, all of our colleagues stand united to find the kidnapped girls and to stop the killing in Nigeria.

We stand united to find the vile and evil Abubakar Shekau, the head of the Boko Haram killing contingent. We saw him most recently grabbing attention by standing in front of a tank, holding a gun, and citing the most ludicrous and insulting prospect that one could hear. He held up $12 and indicated that he would sell the kidnapped girls.

Mr. Speaker, that is not all that he is doing. He has been killing and pillaging. He has caused parents to have to, in essence, go after him with sticks and stones.

Yesterday, we spoke not only with the leadership at the Nigerian Embassy, a relationship that the United States prides in terms of the contribution Nigeria has made, but it is no doubt that, in this instance, we want Nigeria to do more and more and more.

We asked, by speaking to the leadership in Nigeria by phone, that President Goodluck Jonathan stand up and indicate Nigeria’s commitment to finding these girls and, in essence, bringing this horror terrorist to justice.

At the World Economic Forum, his opening remarks did just that. He spoke about the help that was coming from the United States, the leadership of President Obama and Secretary Kerry, and the other nations that are coming together to be able to find these girls.

Outside of Syria and Afghanistan, in terms of mass killings over the recent years, this stands, clearly, in the eye of the storm.

We ask to have created a victims’ fund. We want to be able to ensure that these parents who are, literally, broken and the children that may be found–or the wounded ones–have the opportunity to be made whole.

We believe that it is important to create an elite police or military force, one that is focused to utilize the resources of intelligence and the law enforcement resources that are being sent to Nigeria by the United States. That deployed elite military and/or police force–special ops, if you would–would have the sole purpose of getting those kidnapped girls.

The reason why this is so very important is because Nigeria has porous borders. There is speculation that these girls may be in Cameroon, may be in Chad, may be in Niger, Benin, all places that will make it even more difficult to find these innocent children who simply came to school to be able to take an exam, so that they could do better in life.

How dare we allow this brutal killer to last much longer without being brought to justice?

So that elite force would bring this vile and evil person, who has no intent to do anything more than to continue to ramp up his publicity and the world’s attention to his violence, bring him now to justice, move quickly utilizing the resources and focusing.

It is also important that all of the world’s institutions declare Boko Haram–the ridiculous group that says: we don’t want any western education, and all girls should be married–declared a terrorist organization.

It must be done swiftly, so that all the world’s focus will be on this dastardly, devastating, vile leader of this organization and the organization.

We can collaborate with the African Union and the U.N. peacekeepers. Then we want to provide armed protection for all of the schools as they finish out or continue their educational training.

Mr. Speaker, let me say to you these are like the boys and girls that are in the schools of America right now. These are primary education children. These are secondary.

I ask my colleagues to join in the outrage of this ridiculous and horrible situation. I ask that we are finding our girls and capturing this terrorist leader”, said Rep. Jackson Lee (source: Congressional Record http://thomas.loc.gov/ ).

Note: The Congregation of the People of Tradition for Proselytism and Jihad (Arabic: جماعة اهل السنة للدعوة والجهاد Jamāʻat Ahl as-Sunnah lid-daʻwa wal-Jihād)—better known by its Hausa name Boko Haram (pronounced [bōːkòː hàrâm])—is an Islamic group and takfiri militant and terrorist organization based in the northeast of Nigeria, north Cameroon and Niger. Founded by Mohammed Yusuf in 2002, the organization seeks to establish a “pure” Islamic state ru…led by sharia law, putting a stop to what it deems “Westernization”. The group is known for attacking Christians and government targets,bombing churches, schools and police stations,[15][16] and kidnapping western tourists, but has also assassinated members of the Islamic establishment. Violence linked to the Boko Haram insurgency has resulted in an estimated 10,000 deaths between 2002 and 2013

Filed under: News, Violence
Share Tweet Pin G Plus Email
previous article: “Nigeria faces a killing machine. In the last 48 hours, again, Boko Haram struck and killed 300 people. This killing has been going on for a minimum of 5 to 10 years”, said Rep. Jackson Lee
next article: Military trespassing incident reflects lax security protocols at US Navy base