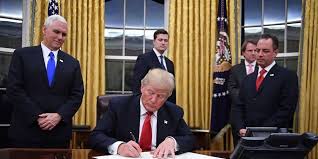 aign was one full of radical promises to the electorate; some which sounded as weird and odd as building of the wall to separate Mexico from the US, and prevent illegal immigrants from coming to the US from Mexico. However, on the other hand Trump seemed to appeal to the business community in the US by promising to protect local businesses from cheap imports from China & Mexico. President Trump went further to propose import tariffs of 45% and 35% for Chin
a & Mexico respectively during his campaigns. The president did not stop at that, he further promised to ensure that he brings back manufacturing jobs back to the US in order to create jobs locally within the US; by forcing US companies with operations elsewhere in the world to bring back their manufacturing plants back to the US.

To reaffirm his firm stand on supporting local US businesses, create jobs for US citizens living in the US and promote inclusive growth driven by local consumption; Trump initiated his campaign of “Buy American and Hire American”. This seemed to be a well thought out strategy of fulfilling his campaign promise of making America great again. During his inaugural speech, Trump emphasized on the issue of job creation and support of local businesses by saying that “Every decision on trade, on taxes, on immigration, on foreign affairs, will be made to benefit American workers and American families. We must protect our borders from the ravages of other countries making our products, stealing our companies, and destroying our jobs. Protection will lead to great prosperity and strength.”

But how far has the Trump administration gone in fulfilling their promises to the business community in the US?

Reduction of regulations in the financial sector

In his early days at the Oval Office, President Trump signed executive orders aimed at rolling back regulations within the US financial sector in order to increase access to credit for businesses and individuals. The major legislation to be affected by these changes is the Dodd-Frank Act. Trump termed this piece of legislation as overly massive and complicated resulting to a lot of bureaucratic procedures that inhibit access to credit for small businesses and individuals. He further explained that with limited access to credit, businesses are not able to expand their operations; with the ultimate result being slow growth and less jobs being created in the economy.

On the other hand, when individuals cannot access credit, their purchasing power is limited which translates to low sales for businesses. With low sales, businesses ultimately end up dying or they retrench some of their employees; hence contributing to an increase in unemployment. According to the Trump administration, reducing regulations within the financial sector would increase access to credit which would then be an immediate solution to the above challenges.

Trump proposed slashing of current corporate tax of 35% by more than half to the lows of 15%. In his perspective, the lower tax rates would result to more cash being left in the hands of businesses as retained earnings. With more retained earnings, Trump hopes that the businesses will re-invest the surplus incomes in business growth and expansion while hiring more employees and creating the millions of jobs that the US needs at the moment.

On the personal tax side, Trump tax reforms proposes a consolidation of the current seven tax brackets into 3; with a maximum tax rate of 33% compared to the current maximum tax rate of 39.6%. By reducing personal tax, Trump is aiming at increasing the disposable income for the citizens; which then boosts their purchasing power and supports business growth and creation of more jobs within the economy. Although there is a lag expected before this kind of readjustments happen in the economy, the end goal seems to be aligned with the “Buy American and Hire American” philosophy. The tax reform is however facing a lot of road blocks in congress and the final tax bill might not have the original provisions as espoused in the proposed tax reforms by the Trump administration. 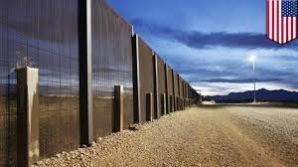 In a bid to prevent illegal immigrants from getting into the US Trump is pursuing his Mexican wall project and proposes a border tax on imports from Mexico in order to pay for the building of the wall. Trump argues that immigrants from Mexico provide cheap sources of labor with salaries below the minimum wage, at the expense of US citizens who then remain jobless. By blocking them from entering the country, the Trump administration will be seeking to protect local jobs from being taken by foreigners.

Besides the wall, the Trump administration proposes tougher regulations and scrutiny of companies using the H1-B visas to get foreign experts to work in the US. The tougher rules are meant to ensure only expertise that cannot be found in the US is outsourced from other countries. This is meant to create more job opportunities for the skilled labor force in the country.

In summary, Trump seems to be on course with his Buy American and Hire American philosophy; albeit with a number of road blocks along the way from congress.