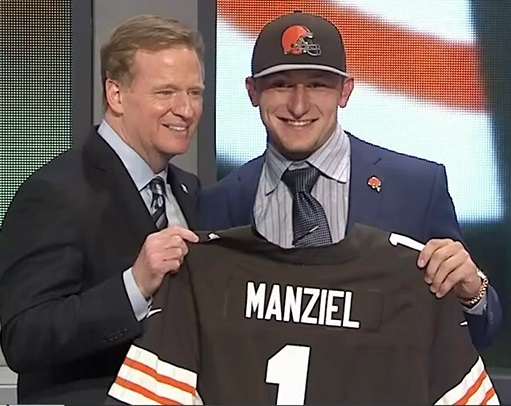 Johnny Manziel, the 22nd pick in this year’s draft, went where no college player has gone before. Not in 78 years. The NFL draft started in 1936. Let’s do the Math. Well, math is not really my thing so let’s do the estimating thing. Roughly 12,000 football players have played in the NFL. And no one went where Johnny Football dared to go. 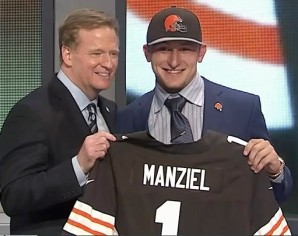 Conventional sports wisdom had Manziel going in the first five players to be drafted. Strange things happen during a draft, so perhaps he would drop to the top ten. Once the draft started he was not the first player taken. He was not taken in the first five players or the first ten. As his draft status continued to plunge, he texted the Cleveland Browns quarterback coach. Here is his text, “I wish you guys would come get me. Hurry up and draft me because I want to wreck this league together.”

The assistant coach then forwarded this text to the Browns head coach and also the owner of the team, Jimmy Haslam. At which time, the owner said, “Pull the trigger. We’re trading up to go get this guy.” So Johnny ‘Football’ Manziel became the 22nd pick and began his journey to be the backup quarterback for the Browns.

WHAT WOULD HAVE HAPPENED IF MANZIEL HAD NOT TEXTED THAT ASSISTANT COACH?

We’ll never know. It’s the road not traveled and all of that conjecture. What we do know is that today, all 214 players that were drafted this year had the same ability to text a coach of a team they had visited. As far as we know, with social media we know quite a bit today, no other player texted a team.

What that text said was that here was a player who wanted to play on this team. A player, who went the extra mile, figured out another way to say, I WANT THIS.

On the season finale of Shark Tank, a college sophomore begged Home Shopping Network queen Lori Greiner to invest in her. She literally begged. Lori expressed interest and then sat on the fence. The college student put it all out there, begging her to partner with her, to help her, to believe in the product. She got the deal. As a viewer, I don’t think she would have gotten that deal without being willing to bleed in front of both the sharks and a national audience. She found a way to show that she wanted it.

So the lessons are many:

In the first 24 hours after the Manziel draft, more Manziel jerseys were sold nationwide than the last top NFL quarterbacks combined. Over 2000 season ticket packages were sold by the Browns. Even billionaire owners and billionaire sharks want the people they select TO WANT IT. Figure out how to communicate that message for your audiences.

PS In the aftermath, Johnny Football has continued to use social media on weekends. Sending out pictures to the world on Instagram, Facebook and Twitter. No matter how thin you make that pancake, it still has two sides. Watch out Johnny, that medium that gave can take away.