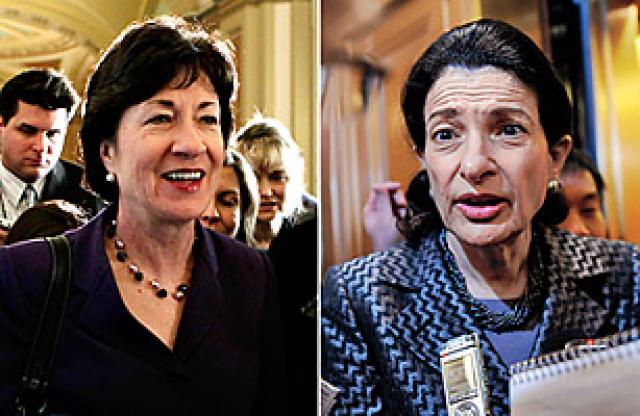 The courtship of Senator Olympia Snowe started in December with a phone call from Joe Biden. The Vice President-elect made sure Snowe had his home telephone number in Delaware so she would know how to reach him on weekends. In the weeks that followed, the two traded memos back and forth about how an economic stimulus package should work. "I had an infinite number of ideas, because they had been stored up," says Snowe, a Maine Republican who never got that kind of treatment when her party controlled the White House. "Now somebody was listening." (See who’s who in Obama’s White House.)

Snowe isn’t the only GOP Senator — or even the only one from Maine — who is getting room service from the other end of Pennsylvania Avenue. After working around the clock for a week with 20 of her Senate colleagues on a compromise stimulus measure, Susan Collins had all but given up. But early on the evening of Feb. 6, Senate majority leader Harry Reid invited her to his office. "I debated whether it was worth going," Collins recalls. "I figured they were just going to put pressure on us to accept their previous offer," which didn’t shrink the spending in the package as much as she had demanded. When she got there, however, she was surprised to discover White House chief of staff Rahm Emanuel, who had come to make a deal. "It was as if all of a sudden they had decided to get serious with the negotiations," she says. "They agreed on the bottom line of our proposal, which was $780 billion."

In the weeks and months to come, Snowe and Collins can expect to be lavished with even more attention from the White House. Those two Maine moderates, plus Pennsylvania Republican Senator Arlen Specter, provided the margin that prevented Republicans from holding Barack Obama’s stimulus package hostage to a filibuster. They also represent the sum total to date of Obama’s claim of bipartisan support for his economic plans in Congress.

This is not the first time Collins and Snowe have broken ranks with their party. They have often found themselves at odds with the GOP leadership on taxes, budgets, the environment and social issues. They have both voted for stem-cell research, against a constitutional ban on same-sex marriage, for giving illegal immigrants a path to citizenship and against a ban on partial-birth abortion. They also both voted to acquit Bill Clinton after he was impeached in 1998.

But what makes Snowe and Collins more powerful now is that they, along with Specter, are nearly the last survivors of a once common species of moderate Northeastern Republican. As the GOP’s center of gravity moves to the right, the Democratic majority has fewer and fewer potential crossovers to choose from. That gives each woman enormous leverage in a Senate Republican caucus whose leaders cannot afford any defections if they are to sustain a filibuster. Both sides know that the math on any close vote is likely to come down to Snowe and Collins.

Which is just what their constituents in Maine like and expect from their Senators. The state has a tradition of flinty Yankee independence that dates back to another Republican Senator, Margaret Chase Smith, who in 1950 issued her famous Declaration of Conscience against McCarthyism — with Senator Joe McCarthy sitting only three seats behind her in the chamber. Maine doesn’t bend easily to the prevailing political winds. Locals take a perverse pride in the fact that no other state has voted more consistently for the loser in modern presidential elections. And while they voted for Obama last fall and for the Democrat in every presidential election since 1988, Collins won her re-election race in 2008 with a margin 6 points larger than Obama’s in Maine.

For all their similarities, the two women are not personally close and hail from very different backgrounds. Snowe, who turns 62 later this month, was orphaned at the age of 9 when her father, a Greek immigrant cook, died of a heart attack a year after her mother died of cancer. Another tragedy brought her to elective office in 1973, when she filled the seat in Maine’s house of representatives that was left vacant by the death of her husband in a car accident. Her second husband, John McKernan, was a colleague of hers in both the legislature and U.S. House; he later became Maine’s governor. Snowe replaced George Mitchell when he retired from the Senate in 1994. Collins, 56, was one of six children in a politically active family in Caribou, a town of 8,300 at the nation’s northeastern tip, 15 miles (24 km) from Canada. Her father was a state senator; her mother, a mayor; and an uncle, a state supreme court justice. She learned her way around Capitol Hill working as an aide to Senator William Cohen for 12 years. After losing a bid for governor in 1994, she made a run for Cohen’s seat when he left it in 1996. One of the things that helped her win was her resemblance to the popular Snowe.

The two women share the quiet competitiveness that often exists between two Senators of the same state and party. Collins is more comfortable in front of television cameras than is Snowe, who often looks for a side staircase where she can sneak away from the klieg lights. Though they typically work in tandem for their state, they do so in very different ways, just as they have on the stimulus negotiations. Snowe, a senior member of the Finance Committee, worked on the tax provisions; Collins, recently named to the Appropriations Committee, focused on spending. Collins, who voted for the George W. Bush tax cuts, is a half-turn more conservative than senior Senator Snowe, who did not. Both women are accomplished fund-raisers — and widely popular at home.

All this Down East independence does not exactly thrill their colleagues on the GOP side of the Senate chamber. South Carolina Senator Lindsey Graham noted that Collins’ negotiating skills helped turn an $819 billion House bill into an $838 billion version in the Senate. "I like them both," he told the New York Times, "but I wouldn’t want them to buy me a car."

The White House is still wooing them. Obama has already met in the Oval Office with both. He will have to keep the courtship going if he hopes to match his success on the stimulus with measures to recapitalize the banking system and reform entitlements, energy and health care. On those issues, Snowe and Collins would tend to be supportive, but neither will go along automatically. Snowe, for one, thinks Obama could have done a better job of reaching out to House Republicans and making them as much a part of the negotiations in that chamber as they were in the Senate. "I’m sure he’s learned from this one," says Snowe. Adds Collins: "The elections are over, and now the American people want us to solve problems and stop fighting. That’s certainly my goal. I love legislating." That’s good. She’s going to be doing a lot of it.