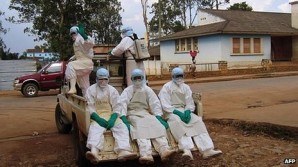 As West Africa struggles to deal with an Ebola epidemic, people around the world begin to wonder how likely Ebola is to spread to other countries and continents and how prepared their communities are to deal with it if it does.

The Ebola virus that has caused 1,200 deaths in Guinea, Sierra Leone, Nigeria, and Liberia is a particularly virulent form of the disease which causes viral hemorrhagic fever and attacks multiple organs in its sufferers. It’s initial symptoms – fever, headache, sore throat, weakness, and muscle pain – can easily be mistaken for many other viral diseases, but progress to vomiting, diarrhea, kidney and liver problems, and in some patients  internal and external bleeding. Ebola has no cure, and no specific treatment either. So far its mortality rate of the current outbreak in Africa is about 60 percent.

Fortunately, Ebola is not an airborne disease, and its method of transmission, through bodily fluids, means that its spread has generally been able to be contained through quarantining patients until they are no longer contagious. At particular risk are health care workers and family caregivers, and they have been advised to wear impermeable gowns, gloves, and masks or goggles to avoid infection.

In the United States most of our deadliest diseases have been kept in check through systematic vaccination. Ebola is similar to HIV in that it is spread via bodily fluids like blood, urine, semen, vomit, diarrhea, and saliva, but, unlike HIV, it does not take years to become apparent and the medical community does not have a wealth of drug options available to slow down or mute its effects.

Many epidemiologists now think that, absent stringent quarantining at the country level, Ebola will eventually surface in many other countries, including the U.S. If this is the case, government officials and healthcare facilities will need to be prepared to close routes of transmission and to clean and sterilize facilities and equipment. Situations like last weekend’s storming and looting of an Ebola clinic in Monrovia, Liberia cannot be allowed to happen. While hospitals do have access to a large number of sterilized instruments and coverings, in an epidemic it is often necessary to clean and resterilize on site.

Ryan Westphal, whose company AEC Systems specializes in designing large scale cleaning to specification, understands the complexities of achieving true sterilization under challenging circumstances in often chaotic environments and recommends that hospitals, clinics, and other related businesses begin to assess the difficulties of accomplishing the sterilization large quantities of used equipment and clothing now before it becomes a pressing issue. In true epidemic conditions, waste disposal – including hazardous medical waste – is not carried out effectively and supplies run out, so healthcare workers must use what is on hand, sterile or no.

Whatever the case, community and healthcare leaders must fully understand the Ebola virus and how it is transmitted and begin training key staff in the implementation of measures to fight it – before it hits American soil. It certainly wouldn’t hurt for the average American to educate himself on Ebola as well, as panic is often as hard to fight as disease.