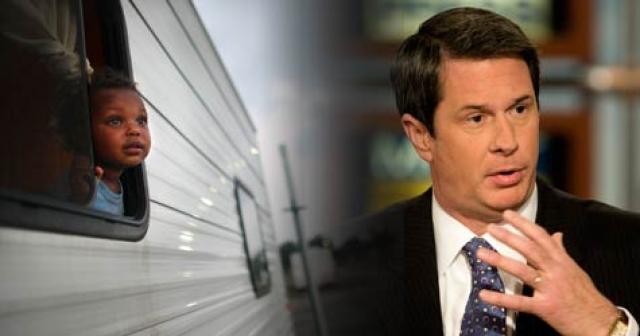 Sen. David Vitter, R-La., has pushed the EPA to slow its process of updating its 20-year-old health assessment of formaldehyde. After Hurricane Katrina, thousands of his state’s residents said they suffered respiratory problems after being housed in government trailers contaminated with formaldehyde. (Left: A child looks out of a FEMA trailer in Port Sulphur, La. May 2008 photo by Mario Tama/Getty Images)

When Sen. David Vitter persuaded the EPA to agree to yet another review of its long-delayed assessment of the health risks of formaldehyde, he was praised by companies that use or manufacture a chemical found in everything from plywood to carpet.

As long as the studies continue, the EPA will still list formaldehyde as a "probable" rather than a "known" carcinogen, even though three major scientific reviews now link it to leukemia and have strengthened its ties to other forms of cancer. The chemical industry is fighting to avoid that designation, because it could lead to tighter regulations and require costly pollution controls.

"Delay means money. The longer they can delay labeling something a known carcinogen, the more money they can make," said James Huff, associate director for chemical carcinogenesis at the National Institute for Environmental Health in the Centers for Disease Control and Prevention.

The EPA’s chemical risk assessments are crucial to protecting the public’s health because they are the government’s most comprehensive analysis of the dangers the chemicals present and are used as the scientific foundation for state and federal regulations. But it usually takes years or even decades to get an assessment done, or to revise one that is outdated. Often the industry spends millions on lobbying and on scientific studies that counter the government’s conclusions.

The EPA has been trying since 1998 to update the formaldehyde assessment [1], which was first written in 1989. But the agency’s efforts have repeatedly been stalled by the industry and Congress.

This time, the resistance came from Vitter, a Republican senator from Louisiana, where, ironically, thousands of Hurricane Katrina victims say they suffered respiratory problems after being housed in government trailers contaminated with formaldehyde. Last year Vitter blocked the nomination of a key EPA official until the agency agreed to ask the National Academy of Sciences to weigh in on the assessment. Vitter’s spokesman, Joel DiGrado, told the media that "because of the FEMA trailer debacle, we need to get absolutely reliable information to the public about formaldehyde risk as soon as possible."

Vitter’s ties to the formaldehyde industry are well known. According to Talking Points Memo [2], his election campaign received about $20,500 last year from companies that produce large amounts of formaldehyde waste in Louisiana. But ProPublica found that Vitter actually took in nearly twice that amount if contributions from other companies, trade groups and lobbyists with interests in formaldehyde regulation are included. Among those contributors is Charles Grizzle, a top-paid lobbyist [3] for the Formaldehyde Council, an industry trade group that had long sought [4] a National Academy review of the chemical.

Congress stalled the formaldehyde risk assessment once before. In 2004, Sen. James Inhofe, R-Okla., persuaded [5] (PDF) the EPA to delay it, even though preliminary findings from a National Cancer Institute study had already linked formaldehyde to leukemia. Inhofe insisted that the EPA wait for a more "robust set of findings" from the institute. The "more robust" findings that Inhofe asked for weren’t released until five years later – in May 2009 – and they reinforced [9] the 2004 findings. Of the nearly 25,000 workers the National Cancer Institute had tracked for 30 years, those exposed to higher amounts of formaldehyde had a 37 percent greater risk of death [10] from blood and lymphatic cancers and a 78 percent greater risk of leukemia than those exposed to lower amounts.

The Formaldehyde Council immediately released a statement [11] disputing those findings and calling for a full review by the National Academy of Sciences. Such an evaluation could take as long as four years, according to an EPA spokesperson.

But this time it wasn’t Inhofe who stepped in on the industry’s behalf, but Vitter, who like Inhofe sits on the Environment and Public Works Committee.

On the day the study came out, Grizzle, the Formaldehyde Council lobbyist, donated $2,400 [12] to Vitter’s re-election campaign, the maximum [13] an individual can give to a federal candidate in a single election cycle. Grizzle didn’t respond to phone calls and e-mails asking for comment for this story.

Grizzle started his own lobbying firm in 1993, after serving as an EPA assistant administrator in the late 1980s. He joined George W. Bush’s transition team [14] in 2001, and raised more than [15] $500,000 for Bush’s 2004 campaign, earning the title of fundraising "pioneer." A Philadelphia Inquirer investigation [16] found that Grizzle used his friendship with Bush aide Karl Rove to help get Stephen Johnson the job as assistant administrator for the Office of Prevention, Pesticides and Toxic Substances at EPA. When Johnson went on to lead the EPA, he changed the risk assessment system so other federal agencies could comment more frequently and forcefully on the EPA’s science, a move that prolonged the process. In the waning days of the Bush administration, Johnson asked the National Academy of Sciences to do a full review of the formaldehyde assessment.

DiGrado, Vitter’s spokesman, didn’t respond to questions about Vitter’s ties to the industry. Instead, he  sent ProPublica copies of two letters. One showed that three Democratic lawmakers [17] also wanted the review. The other letter was written by an EPA official in the final week of the Bush administration, saying that the agency would "seek input" from the academy.

Several public health experts interviewed by ProPublica think the industry’s goal is to delay the assessment as long as possible and to undermine the credibility of the EPA’s chemical risk assessment program.

"This gives the appearance of another congressman being more interested in industry than the health of the public," said Dr. Peter Infante, a former director of the Office of Carcinogen Identification and Classification at the Occupational Safety and Health Administration. "The public should not think that because a government document is undergoing NAS review, that that review is going to be competent."

Other public health experts point to the National Academy’s recent review [18] of the EPA’s assessment of perchloroethylene, or PCE, as an example of how additional studies can drag out the assessment process.

PCE is used in dry cleaning and is found in high concentrations at military bases. Like formaldehyde, it has been linked to leukemia, and the EPA has been trying to update the chemical’s assessment since 1998. In 2008 the agency submitted its findings to the National Academy, and in February the academy sent the assessment back to the EPA with a long list of questions. Although the academy agreed with the EPA’s conclusion that PCE was a "likely" carcinogen, it suggested that the safety standards should be significantly weaker than those the EPA had proposed. The EPA is now responding to the academy’s comments.

Democrats [19] in Congress and public health watchdogs have criticized the academy in the past for being slanted toward industry, because some of the scientists who serve on its review panels have written studies paid for by chemical companies whose products they are evaluating. An academy spokeswoman said it thoroughly vets its panelists and has strict financial conflict of interest rules.

The Road to Review

Vitter began his push for a National Academy review of formaldehyde in a June 29 letter [20] to the EPA. It included a list of questions about the formaldehyde assessment and urged the EPA to ask the National Academy [21] to weigh in on it, according to documents ProPublica obtained through a Freedom of Information Act request.

The EPA responded on July 8, defending its plan to have the assessment reviewed by its own external peer review panel, the Scientific Advisory Board. The letter noted that the advisory board could do the review in 12 to 16 months for about $200,000, while the average National Academy review takes 18 to 24 months and costs $800,000 to $1 million.

In September, two more major scientific reviews raised concerns about the dangers of formaldehyde. The International Agency for Research on Cancer, a division of the World Health Organization, concluded it had enough evidence [22] (PDF) to show that formaldehyde exposure can cause leukemia. And the National Toxicology Program changed its categorization of formaldehyde [23] from "reasonably anticipated to be a carcinogen" to "known carcinogen."

But Vitter continued pressuring the EPA for more review.

On Sept. 23, he confirmed to reporters that he had placed a hold on the nomination of Paul Anastas, the Obama administration’s choice to head the EPA’s Office of Research and Development. He said he wouldn’t release the hold until the EPA agreed to send the formaldehyde assessment to the National Academy. To smooth the way for that review, he tried to add an amendment [24] (PDF) to an EPA appropriations bill mandating that the agency set aside $1 million for a National Academy review. Grizzle, the Formaldehyde Council lobbyist, worked to get support for the amendment, according to one of his lobbying disclosure forms [25] (PDF). (The amendment wasn’t included in the final bill.)

On Sept. 24 EPA chief Lisa Jackson met with Vitter and offered a compromise: She would ask the National Academy for its advice on the formaldehyde assessment.

That same day, an EPA spokeswoman told the New Orleans Times-Picayune that the chemical didn’t need more review [26], and that the EPA was ready to begin finalizing its assessment.

"This is not the time for more delay," said EPA spokeswoman Adora Andy. In November, a political action committee created by the American Chemistry Council, whose members include formaldehyde producers Hexion Specialty Chemicals and DuPont, gave Vitter [27] a $2,500 campaign contribution, in addition to the $1,500 it had given him earlier in the year. On Dec. 2, Koch Industries gave Vitter’s political action committee a check [28] for $5,000. On Dec. 7, Grizzle gave Vitter [29] (PDF) $200. On Dec. 17, the Society of the Plastics Industry, which represents formaldehyde manufacturers BASF and DuPont, hosted a fundraiser [30] for Vitter at its headquarters, recommending donations of $1,000 per person.

On Dec. 23, Vitter got what he wanted. Jackson agreed to send the study to the National Academy. But in a letter Jackson sent to the Formaldehyde Council [31] that day, she indicated it would not be the exhaustive study the industry had pushed for but would instead be done under a "compressed timeframe." Dr. Peter Preuss, who heads the EPA’s chemical risk assessment program, said it will likely be completed in a year.

Vitter removed his hold on Anastas’ nomination on Christmas Eve, and the Formaldehyde Council released a statement [32] praising his work.

"Overcoming the agency’s intransigence in engaging NAS on formaldehyde would have been impossible without the timely intervention of U.S. Senator David Vitter," Betsy Natz, the council’s executive director, said in the news release. The statement said Jackson had contacted the council directly to notify it of the news.

Last month the National Academy began gathering public comments about the 13 scientists it has selected for the formaldehyde panel. The Natural Resources Defense Council, an environmental advocacy group, has already written a letter [33] raising questions about two of the candidates. One worked for the Hamner Institute, an industry-supported laboratory that lists the Formaldehyde Council as one of its sponsors. The other worked for more than a decade at Dow Chemical, which is a member of the Formaldehyde Council and has contributed to Vitter’s campaigns.

On March 24, Grizzle, the Formaldehyde Council lobbyist, co-hosted a fundraiser [34]for Vitter at the Capitol Hill Club, an exclusive Republican gathering place. The suggested donation was $1,000 per person.

Write to Joaquin Sapien at joaquin.sapien@propublica.org [35] .