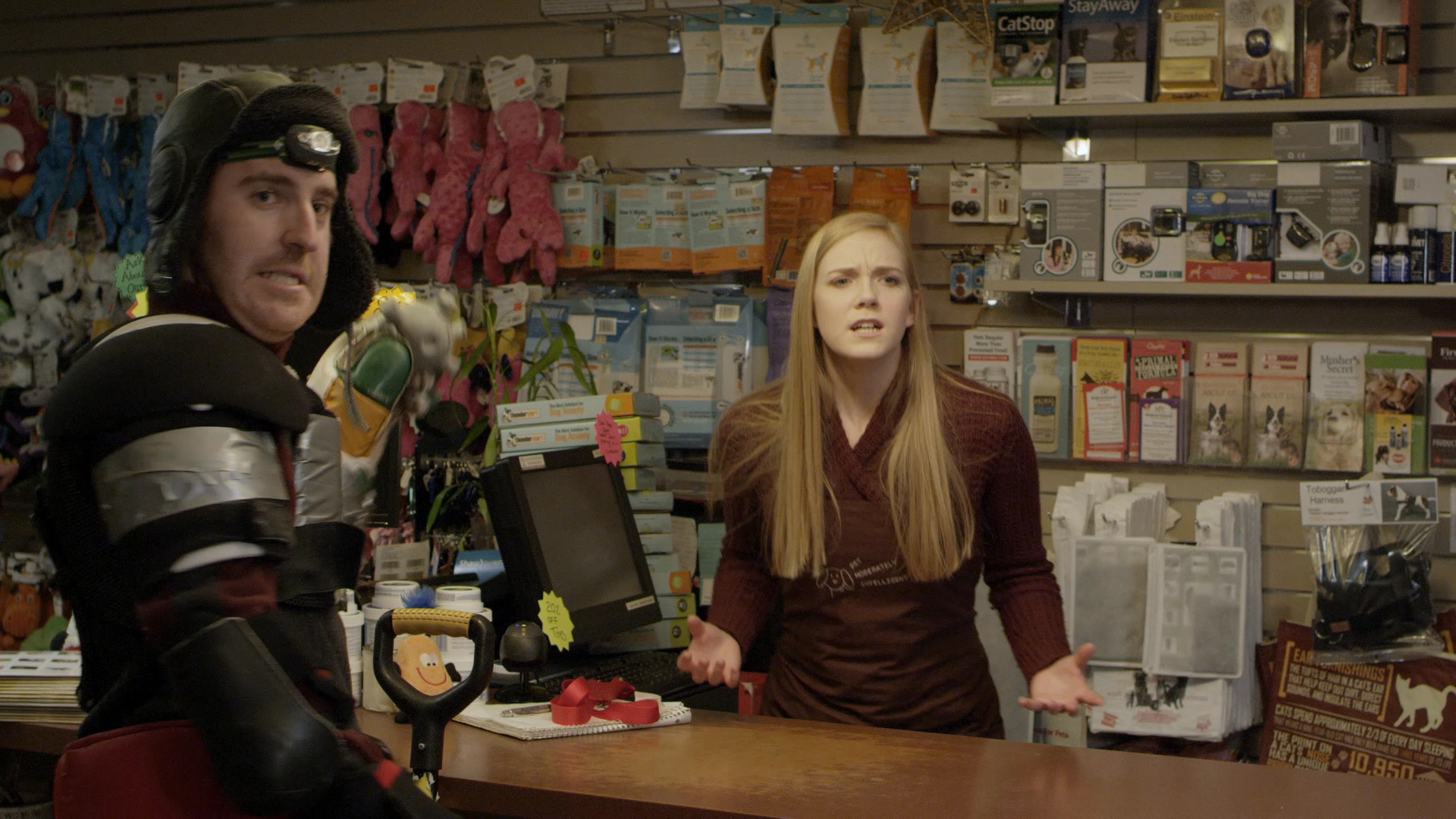 Breaking through the fourth wall a bit, I can tell you that one of the most interesting things about being a writer is witnessing someone or some project that is about to become hugely successful. On that subject, allow me to present How to Survive a Zombie Apocalypse in Retail. It’s not hyperbolic to say that this is the singularly most unique and self-actualized pilot I’ve ever seen. None of the components are new but the composition and arrangement is so clever and so professional that it is completely void of the overly produced and predictable productions which overwhelm many of the airwaves. Any production is a massive team enterprise but it must be noted that Troy Greenwood’s fingerprint is evident throughout How to Survive… with his role as a writer/producer/director/actor (seen as Will in this pilot). The mixing of so many different elements for a production often falls short, How to Survive… exceeds immensely because it possesses a key element which other productions lose; heart. The sincerity of the humor is in diverse correlation with its incredible soundtrack (contributed by Thilo Schaller) which is easily on par with any movie score and exceeds what is typically found in TV productions. There is an obvious tone in this production that Greenwood and Patrick Thomas Murphy (Greenwood’s writing and producing partner) have set here, it’s that only the highest quality of performance is acceptable. Watching How to Survive… reminds one of seeing the very first cast of Saturday Night Live in the mid 1970’s. The writing and the ensemble performances are unaffected by the attention that they will soon receive. It’s an appropriate analogy for those who have seen it. How to Survive a Zombie Apocalypse in Retail won the Merit Award at the Indie Fest Film Awards 2016, as well as a quarter-finalist at the NexTV Fest, and has been in discussions with several broadcasters. The core genius of the production is that it appeals to such a wide demographic without the compulsion to “buy into” any specific one. The show has its own tone and personality but, if forced…one might liken it to Community meets Friends meets Walking Dead or even Shaun of the Dead meets Dawson’s Creek; without the overt sappiness. There are certain pairings that work perfectly together when properly done; cheese and wine, pizza and beer, lemonade and brownies, and now zombie apocalypse and retail.

This independently produced twenty-three-minute pilot is an obvious labor of love. The cast and crews’ belief in and recognition of the fact that they were creating something very special is obvious. The transitions between drama and comedy are so well timed and executed that there is no foresight, no sense of “I saw that coming.” How to Survive… pokes as much fun at itself as the zombie genre but never loses sight of the real danger that the main characters could fall subject to. It spotlights the all too human condition of homeostasis, our ability to begin to accept anything (even the most frightening of scenarios) as mundane. We somehow seem to find our romantic lives as the pivotal point of existence and purpose. By reflecting this back at the audience, How to Survive… shows the consequences of relationships with the living and the non-living. The pilot itself has a personality not unlike that of a living person. At times dramatic, amorous, self-involved, insecure, and brave, How to Survive… displays different emotions depending on the situation it is relating to at the time. While many TV productions seem to always present the same perspective, How to Survive… vacillates, which makes it much more interesting. Yet, it somehow adeptly avoids becoming trite or heavy…a major accomplishment almost unseen in television. How to Survive… centers around two brothers; Simon Gellar (played by Patrick Thomas Murphy) and Will Gellar (played by Troy Greenwood). Will is the older brother to Simon.  At the start of the initial zombie outbreak, their parents (a doctor and a pastor) end up flying to Africa to try and contain the epidemic before it spreads. With the spread of the epidemic, the airports are shut-down and Will and Simon are left in this family house uncertain of what’s happened to their parents…but fearing the worst.  Will decides to rent out the rooms to friends, and invites his girlfriend to move in, trying to find a way to create a family of sorts.  Simon is struggling with the loss of his parents as well as his girlfriend, who disappeared when the outbreak hit North America.  Will does all he can to keep his family together, but it’s not easy for him and over the course the course of the first season a void begins to form between Will and Simon, as well as the rest of the house.

Glasses containing both the lens for comedy and drama are appropriate for viewing the show, and both lend to an appreciation for the story. For those who have found themselves yelling at their screens during other zombie productions, the hilarity of herding zombies with men’s cologne or repelling them with free-trade coffee is soothing. Simultaneously dealing seriously with the loss of a parent is the type of writing which helps create this sweet and sour storyline. The appeal of this comedy/horror is as wide as the Grand Canyon. Being involved on and off screen allowed Greenwood to help foster the vibe of this production, all though it took a bit of a toll personally. He states, “The character of Will was a good fit and I knew I could pull it off.  I was a little worried about managing so many hats and initially had some people out to audition for the role. I didn’t find anyone that seemed to be the right fit. My involvement in the other aspects of the film, including casting, gave me a deep understanding of Will’s place in the project and it was much easier for me to fit into that piece without the need to pull attention to Will. In the end, it proved tiresome, but it was also a blessing because I didn’t have to worry about scheduling another actor and I didn’t have any doubt that I could play the character (just a little bit about surviving the shoot). In the end, it was difficult, but definitely the right decision. The entire cast and crew were simply amazing. They were all contacted because of their exemplary talent but there became a moment when everyone realized that we had all discovered something truly great and that excitement pushed us all even beyond what we thought we could achieve.” Manie Madden (Mrs. Gellar in How to Survive) declares, “I was excited to audition for the role of Mrs. Gellar. You always perform to the best of your ability but, when everyone does this AND the writing is so good…and unique! Well, you end up with something very special like How to Survive a Zombie Apocalypse in Retail. There’s never a way to really know what will happen but being a part of something this good is very exciting and rewarding!”

While the twelve-fourteen plus hours of work per day nearly turned Troy himself into a zombie, the attention and praise which the production has received has confirmed the effort and time were well spent. Discussing the awards and attention How to Survive… has received, Greenwood comments, “Toward the end of the shoot, the weight of wearing so many hats took its toll and it really became just a matter of surviving to the end. The product was well worth the effort though. Stellar performances from the cast gave depth and life to the characters above and beyond my expectations, and the humour and heart my co-writer and I had carefully laid into the script came pouring through. Adjustments made (on the day) through collaborations with the actors provided some of the greatest comedic moments lifting the material to even greater heights. After all the time and effort I had put into the project it was so great to have it be so well received. I thought it was good but I’d looked at it so many times, I felt like I’d lost any perspective on it. It wasn’t until I started to screen it for people and I heard audible laughter that I started to think I was on to something and the awards were just continued reinforcement that I’d really created something good. In terms of my career, it’s given me the confidence to attempt even larger productions. I’m currently in the early development of two features.  A revenge western, and another based on some real life events from the 1950s.” If How to Survive a Zombie Apocalypse in Retail is an indicator, both of those features will be layered and unpredictable, which is exactly what viewers want these days. 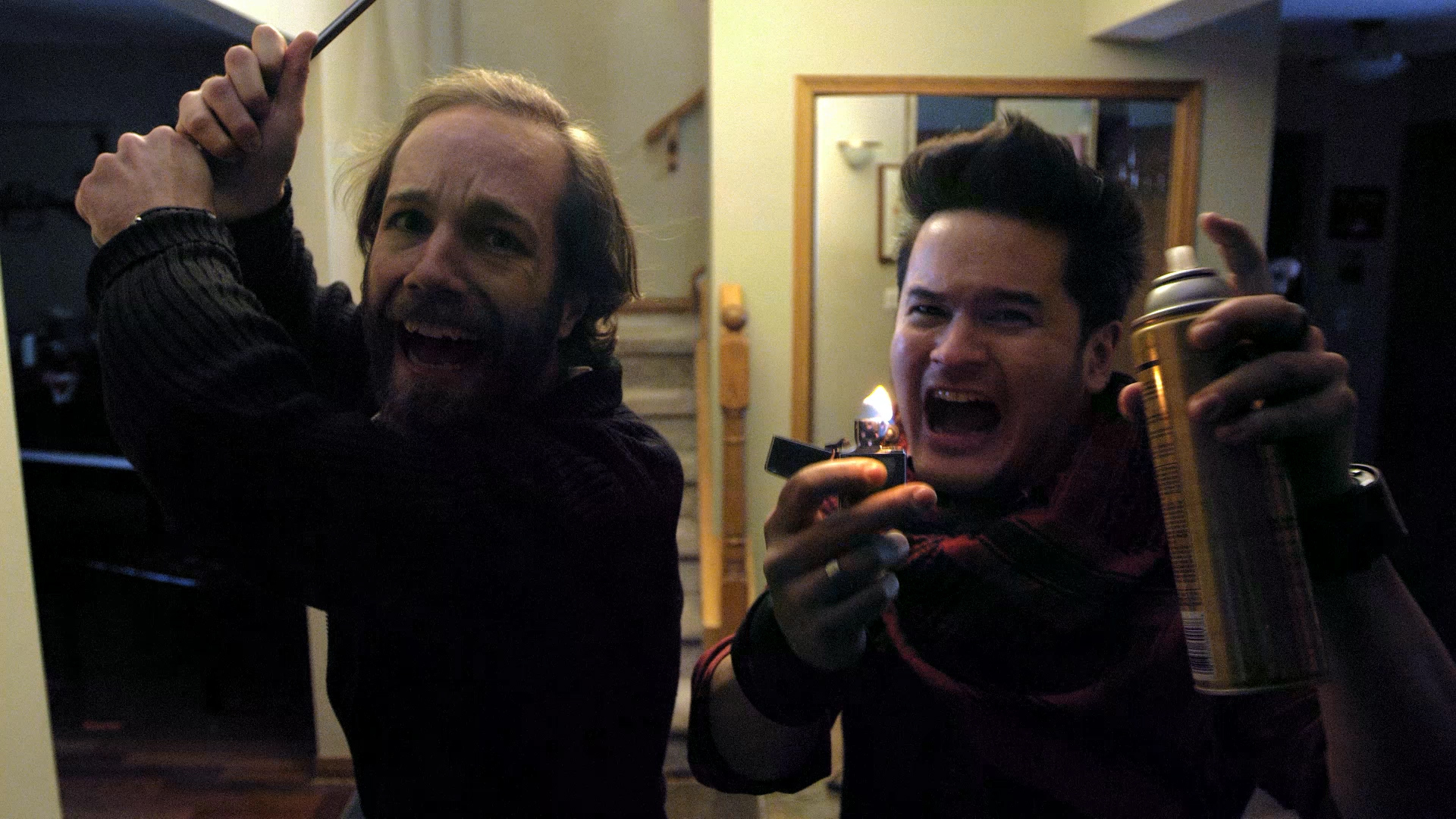