The history of torture in the world in a long and convoluted one.

Torture broadly defined is any method used to inflict extreme pain or suffering for the purposes of intimidation, coercion, or the extraction of confessions and information.

To be clear torture is sick, depraved and demonic at its core!

In truth its basically an attempt to kill a person without their dying by bringing them close to death.

Here are some methods of torture used by many countries, including the United States military and Central Intelligence Agency (CIA):

1) Pharmacological torture techniques and abuse – usually done by (so called) “medical professionals” including the use of hallucinatory drugs, psychotic medications, muscle paralyzing drugs and venom.

2) Coercion techniques – including  being forces to watch the torture of loved ones, children, friends and family members.

5) Suffocation – also known as water boarding, having you head forced into a bucket of cold water or toilet filled with feces and urine to simulate drowning.

6) Psychological – mock executions, Russian roulette, use of insects, snakes and spiders while your trapped in a confined space like a box where you can’t stand up or straighten your legs out.

Torture by US military personnel in Iraq.

Always prepare a a plan to escape.

Become “the Grey Man” – the goal here is to appear calm and submissive. Becoming the “Grey Man” is a term used within U.S. intelligence circles that refers to a person who blends into any scene or situation without drawing attention to himself. While concealing his or her expert survival knowledge and skills. The more calm and personable you are the greater the chances of establishing a communication with your captor or captors.

Always attempt to humanize the attackers by calling them by their name – if you know it.

Exaggerate wildly – if you can’t maintain the pain and abuse of torture let the pain show in your eyes, exaggerate what the physical abuse is  having on you. Scream out with pain! This will make your captors think they have reached your threshold for pain.

Let loose – urinate, defecate and vomit all over yourself! Captors are less likely to abuse you if they abhor the thought of even being around you, touching you or for that matter being in the same room with you! 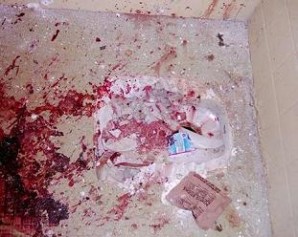 Torture at US military prison in Iraq.

Give only little pieces of information that is hard if not impossible to verify. Give wrong information or disinformation when and where possible. Sometimes this means telling the torturers whatever they want to hear, make it up as you go along. It might even stop them from abusing you further.

With that being said giving misinformation too readily or too much could cause the captors to get impatient with you and kill you.

See also: US troops accused of torture in Iraq and Afghanistan in war crimes trial https://groundreport.com/us-troops-accused-of-torture-in-iraq-and-afghanistan-in-war-crimes-trial/

See video: How to survive torture and interrogation by former SAS commander http://www.youtube.com/watch?v=jgU64aQkYEs