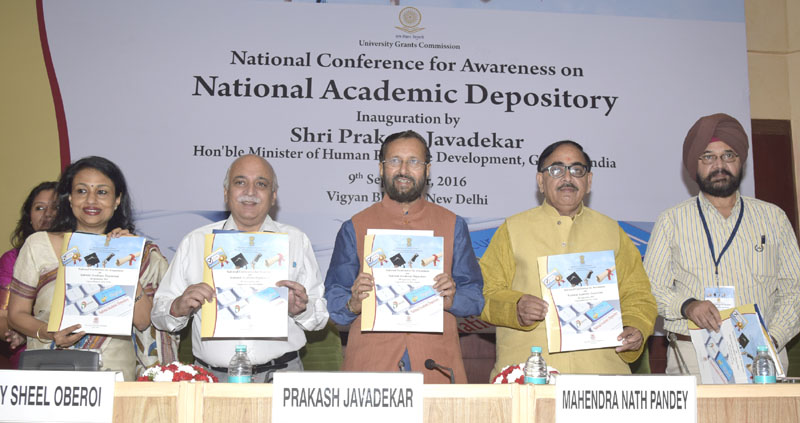 The Union Minister for Human Resource Development, Mr. Prakash Javadekar releasing a brochure at the inauguration of a National Conference for Awareness on National Academic Depository, in New Delhi on September 09, 2016. The Minister of State for Human Resource Development, Dr. Mahendra Nath Pandey and the Secretary, Department of Higher Education, Mr. V.S. Oberoi are also seen.

Way Of Life Is Changed Due To Technology

He further added, we are witnessing change here; way of life is changed due to technology. He further stated that technology has become all pervasive in all walks of life, whether it is shopping, booking railways ticket, banking or mobile recharge; we have witnessed a huge transformation in the way we used to function.

The Minister stated that the securities depositories in the country have already made dematerialization of the financial securities and have been ensuring the safety of the financial wealth of the investors. This system can now be replicated for the educational awards. It is high time the academic awards are verified and authenticated, accessed and retrieved in a digital depository. He encouraged the institutions present to change the mind-set by welcoming technology in the form of NAD and make it a reality. Union Minister emphasised upon 3 things, change in mindset, absorbing ‘tried, tested and trusted technology’ and thus enhancing transparency and authenticity.

Dr. Mahendra Nath Pandey, MOS (HRD) echoed the views of HRM and added that now even the poorest of the poor are able to seek access to higher education, thereby increasing the number of individuals seeking educational certificates. The need for such a measure as NAD is well established. The initiative, he stated, will be a footprint into a new era of 21st century.

Speaking on the occasion, Secretary (Higher Education), MHRD, Mr. Vinay Sheel Oberoi, said that the cardinal principle in the NAD system is for any award to be made available to any person other than student, only with the explicit consent of the student. He also requested all the academic institutions to get on board quickly and requested the participants to disseminate the experience with others involved in the process.

Joint Secretary (Higher Education), MHRD, requested representatives from various Central higher educational institutions and State public universities participated, to engage actively in the presentations and live demos that followed. A series of training workshops are being organised, region-wise. The event ended with the vote of thanks to the participant academic institutions.