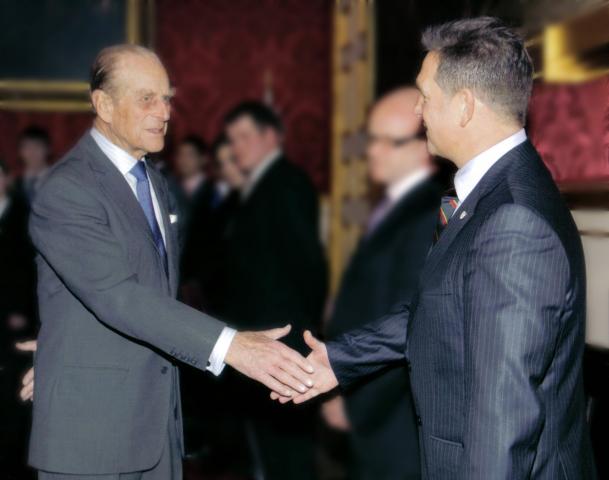 
LONDON – At an award ceremony at the Palace of St James, the world’s leading commercial diplomat Colin Evans meets HRH Prince Philip The Duke of Edinburgh.

By request of the Royal Palace Prof. Colin Evans, who won his own Gold Duke of Edinburgh’s Award in 1981, joined other dignitaries attending the event as an ‘inspirational case study’ where he met and congratulated Gold Award holders on behalf of Prince Philip, as a VIP Guest Presenter.

He was then personally introduced to Prince Philip and given an exclusive tour of the Royal Apartments. This is the second time the pair have met in an official capacity, the previous occasion being some 29 years earlier at a similar ceremony at Buckingham Palace.

"witty and cheerful and exactly as I remember him"

Prof. Evans described the Senior Royal as "witty and cheerful and exactly as I remember him". He once served alongside Prince Philip’s youngest son, Prince Edward The Earl of Wessex, during their time as commissioned officers in the elite Royal Marines. During his military service Evans also had the privilege to be an Honour Guard Subaltern to Queen Elizabeth II.

During his inspirational speech to assembled dignitaries and the families of those being awarded Colin Evans explained that he always thought of the Duke of Edinbugh’s Award Scheme as a "Certificate of Good Citizenship". After his speech he presented the Awards on the Prince’s behalf.

Evans is well known for his work as a freelance diplomat where he has gained a reputation for advising missions and trade delegations and making them profitable. He has recently been appointed Commissioner of Economic Development and Trade Diplomacy at the Intergovernmental Organization EUCLID and is Adjunct Professor of Trade Diplomacy at EUCLID University.