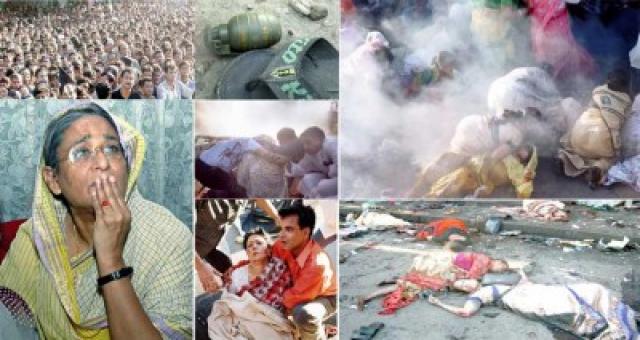 The party secretary on Women affairs Ivy Rahman died in the Hospital later in the day. The unknown assailants fired seven bullets at the bulletproof SUV that Hasina boarded immediately after the blast.

The unusually poor deployment of police at the rally and the absence of forces on nearby building rooftops are a remarkable deviation from the usual practice.

Motaher Hossain, general secretary of AL Krishak League said some people on the roof of Ramna hotel and adjacent building were throwing bombs. At least 13 grenades exploded one after another, and also who were present on the spot told a white Microbus carried of some injured person who were among the assailant and were wounded by their own bomb.

Blame game started at the very moment Hasina spoke out loud about government’s conspiracy to kill the remaining member of Bangabandhu Sheikh Mujiber Rahman’s remaining family members, BNP leaders hold back and Abdul Mannan Bhuiyan commented that they have blamed the government out of emotion. But soon BNP leaders changed their tone and started to blame AL for attacking their own rally, they argued AL had done it to destabilize the country and discredit the government only to grab the power.

Fiction and conspiracy theories were put forward by various columnists in the media. Pro Awami columnists blamed the fundamentalist forces and the right wing coalition government for this attack while pro BNP columnists blamed AL and pointed finger towards the country’s biggest neighbor India.

However most columnists inclined towards Awami league and left parties and leaders and activists of these parties discovered a pattern in the bomb blasts. In most cases secular forces and those who believe in culture, tradition and democratic values had been the target. The same group was behind the attack on Hasina’s rally.