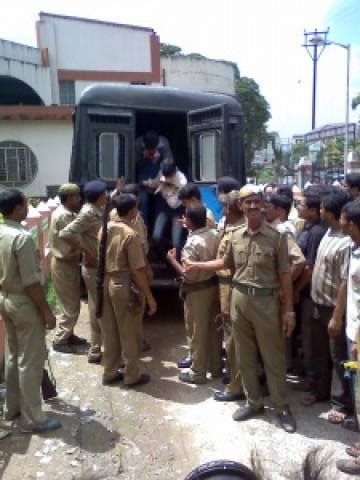 Political patronage and partisan police force have helped to increase the influence of land mafias in Calcutta and its surrounding areas.Rajarhat land fiasco once again proved that politician-criminal nexus has played a major role in Bengal.Local Police knew everything about the forceful land grabbing of unscrupulous promoters of Vedic Village but they kept mum.Like Singur,Nandigram,Rajarhat land fiasco rocked the Buddhadev Bhattacharya led democratically elected Left Front government.
Human right organisations often accused Bengal police for human right violations.Amnesty International,West Bengal Human Rights Commission(WBHRC),National Human Rights Commission(NRC) and other human right organisations like APDR time and again pointed fingers against Calcutta police and West Bengal police for torture and ill-treatment of people in police custody.Amnesty International has received a large number of reports of torture,deaths and illegal detention by the police in West Bengal.According to Amnesty International report,West Bengal had the highest number of deaths in police custody in India(27)during the period 94-96 Amnesty International alleged that the victim of torture had been illegally for several days in the police custody in violation of section 167 of the Code of Criminal Procedure(CrPC) which provides tat all detainees should be brought before a magistrate within 24 hours and also violates the article 9(3) of the International Covenant on Civil and Political Rights(ICCPR).In recent years,police custodial deaths,torture in West Bengal have declined slightly.Much highlighted human right violation case where Bhikari Paswan was picked up by the police from his residence on the night of Oct.31,1993 at about 12-30am.His where abouts since then are not known.According to human rights organisations,Bhikari, a jute mill worker, was abducted by the then additional superintendent of police 0f the district Hoogly police Harman Preet Singh and three other policemen.He was reportedly taken to a police outpost in Telinipara,Hoogly,where he was tortured to death. But his body has not yet been found.The disappearence of Bhikari Paswan is still a mystery.