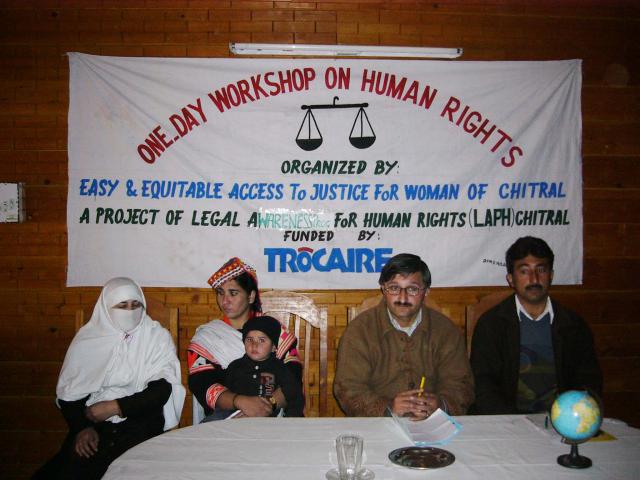 The speakers, blamed increasing number of women suicide at Chitral due to depriving them from their basic human rights. Speakers expressed these views during a one-day workshop on human rights at Bumborat village of Kalash valley. The workshop was organized by Easy & Equitable Access to Justice for women of Chitral a project of Legal Awareness Program of Human Rights (LAPH) funded by TROCAIRE Ireland. The speakers said that there is only 1 lady doctor for 100000 women patients, similarly only 28 women were employed in different NGOs but they have only 14% employment opportunities in education department, 2% in bank services despite that women comprise over 52% of total population of Chitral. They said that only 3% girls students reach high school level and 97%  them dropt out before enrollment in matric classes.

They said that present status of women empowerment at Chitral is a tremendous threat to their personal rights. The speakers said that although Islam has bestowed basic human rights to women folk but they were deteriorated and violated by customary practices. Niaz Ali Shah chairman board of Directors Legal Awareness program for human rights (LAPH) said that LAPH has left no stone unturned for providing human rights to women of Chitral. He added  that we tracked 230 cases, free of cost, of oppressed and helpless deserving women folk in different courts of Chitral. Besides it LAPH also supporting female students to reduce their dropt out ratio, supporting widows in rehabilitation, constructing waiting rooms at different Bus stop for women folk, provided chairs for women patients at OPD at DHQ hospital and beds at district jail for women.

The speakers criticized education system at Chitral especially at Kalash valley. They alleged that some teachers remain absent and are enjoying long leaves. Especially in girl’s school some female teachers have hired other educated girls giving them 2000 per month to teach students instead of themselves, causing a fall instandard of education. They said that we should provide basic amenities and facilities to women folk, as it is their basic human rights, being an important component of our society.

The speakers appreciated efforts of LAPH for fighting basic human rights of women of Chitral and creating awareness among them to enable them for raising voice of their rights. A large number of men and women folk from both Muslim and Kalash (non Muslim) community participated in workshop.