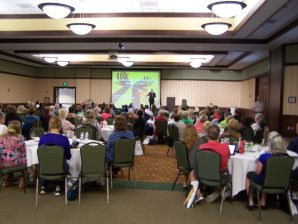 The conference began with a film sponsored by the U. S. Department of Human and Health Services that promoted “Rescue and Restoring” trafficking victims. The film also promoted the National Human Trafficking Resource Center at telephone number 1-888-373-7888.

South Carolina Attorney General Alan Wilson took the floor and spoke about what the State is doing about the billion dollar trafficking problem: a Human Trafficking Task Force has been created where multiple law enforcement agencies are working together to prosecute human traffickers. Also, the State Grand Jury can have cases investigated across county borders.

Mr. Wilson had begun his address by stating, “Modern day slavery is alive and well in 2016.”

Then Robin Causey, a prior field investigator of human trafficking from New York City, who had much success helping victims get their lives back together, spoke about ways to identify perpetrators and the victims.

After a wonderful lunch, Carrie Fisher, with the U.S. Assistant Attorney’s Office in South Carolina, reiterated that human trafficking is a problem. She also went over the character traits of human traffickers and how prosecution can occur if victims tell their stories.
When asked a question about micro-chipped victims, she said she had not been informed of such practices and there were no cases she knew of.

Work groups were later formed to discuss further ways to identify and get rid of the human trafficking problem.

Credit goes to the Women’s Club of North Myrtle Beach for hosting such an issue as human trafficking, with hopes of saving our young children from a system of abuse and covert activity.