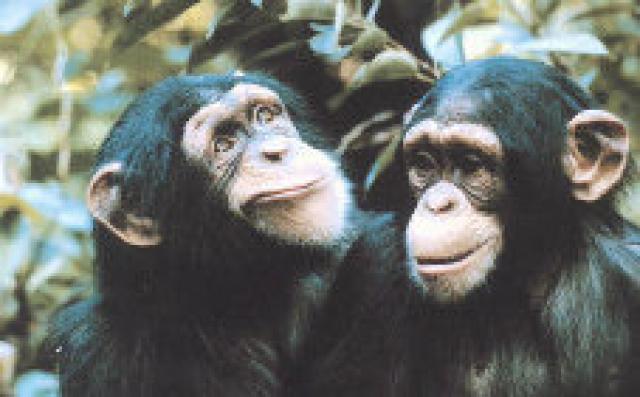 We were taught at school and college that of all animals, it is us humans who are the thinking ones, the sapient or wise ones. Now we realize how anthropocentric this claim has been. The title we have given ourselves, homo sapiens, is a trifle arrogant particularly since the antonym of ‘sapient’ is ‘stupid’.

The exposé comes when we study chimpanzees, the cousins in our family tree from whom we branched off a few million years ago. Are they as cognate and thinking as we are? Dr. Tetsuro Matsuzawa of Kyoto University has recently shown that 5-year-old chimpanzees beat college students in a memory task. His research paper in a recent issue of Current Biology describes the performance of three 5-year-old chimps that have been taught the order of the Arabic numerals 1 to 9.

They were then given a test where they see nine numbers on a computer screen; when they touched the first number, the other eight turned into white squares. The task was to touch all these eight in the order of numbers that used to be there.

In a competition between them and a dozen college students, the chimps consistently won; and among all, the chimp called Ayumu came out to be the Einstein. The scientists remarked: “this challenges the notion that humans are superior to chimpanzees in all cognitive functions.”

The word cognition is a heavy one. It implies the act or process of knowing, perceiving. It also implies ideation and abstraction. Ayumu’s action fits the definition. So did the action of the 42-year-old chimpanzee called Washoe, who recently died at the Central Washington University campus in America.

She became so famous that her obituary was written as a tribute in serious professional journals.

Washoe was brought up from the age of two by the scientist couple Allen and Beatrice Gardner, who were involved in a project to study whether chimpanzees can learn a language and communicate with us. Since chimps do not have the vocal apparatus to be able to speak, the scientists decided to teach Washoe the American Sign Language or ASL.

Starting with one of her own body and hand gestures (bringing arms together), they moulded it to mean ‘more’. Soon, the Gardners found that Washoe could pick up ASL signs by observing humans around her, who were using ASL among themselves. It is reported that in time, Washoe could reliably use a vocabulary of about 250 words and ideagrams.

As if this was not enough, Washoe had adopted a young chimp, called Loulis, as her son and taught and passed on some of her knowledge. This of course would have involved the use of chimp language to help him learn and acquire human ASL.

Project Washoe, expectedly, has created a stir in scientific circles that is yet to be resolved. Forty years ago, the linguist Noam Chomsky suggested that all languages in the world are governed by an identical universal grammar.

He has claimed that each baby is born with knowledge of this grammar; in other words, the language instinct is a biological inheritance, and there might be a genetic basis for language.

If this claim is true, we should expect not just chimps, but even other mammals such as dogs, cats and rats would be linguistically proficient — each in its own style, and capable of abstract thinking and expression.

Other linguists, notably Steven Pinker of MIT, are critical of ‘oversellin’ language instinct purely as a genetic gift. He says language is complex and useful, and is surely adaptive.

“It is ironic that people try to ‘elevate’ apes by forcing our communication system on them as if that is the measure of their biological worth”.

Even with this cautionary caveat, studies on animal cognition keep throwing surprising revelations into the biology of thought and abstraction. Can we do without what Pinker terms as “forcing our communication system on them”, and study whether animals can ‘categorize’, or discriminate between, say, large sets of pictures without human cueing?

This issue has been addressed by a Viennese group led by Dr. Friedericke Range in the November 2007 issue of the journal Animal Cognition. Using a novel touch-screen method, his group found that all dogs tested are able to classify photographs of natural stimuli (dogs versus landscape pictures) by means of a perceptual response.

In a paper that follows Range’s in the same issue of the journal, Drs. Rossi and Ades show that dogs are able to acquire and consistently produce a set of signs, when communicating with humans. (Dog owners would say: “of course we knew it all along”.)

A few years ago, zoologists in the U.K. showed that the lowly common crow could bend a wire into a hockey stick and pull out a piece of food from a tall jar. Tool making of this sort requires analysis, ideation and abstract thinking.

In having done so, the crow is sapient. In being able to discriminate between natural stimuli, the dog is sapient, and in learning and teaching ASL and beating college students in a computer game, the chimpanzee displays sapience. Is it time to broaden the title homo sapiens to other animals?

We might at least start with the apes (pan sapiens), as Dr, Matsuzawa has already written a book titled: ‘Primate Origins of Human Cognition and Behaviour.’