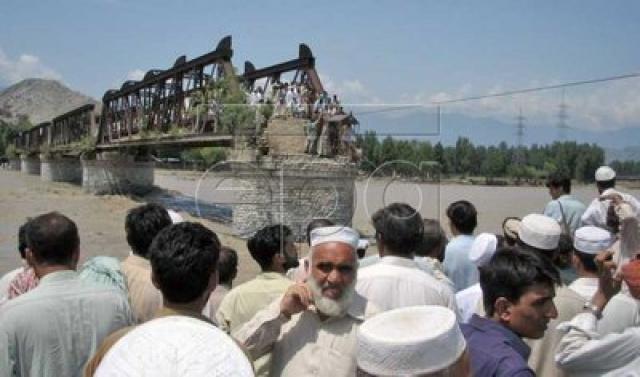 CHITRAL:  Hundred of households have been disconnected from main Chitral at Golain goal valley because of damaging 4 bridges and links road to the entire valley some 60 KM from here. Golain goal valley is situated between rigid and high mountains near Koghuzi village and link road to the last village of this valley passes through Golain river but due to recently tremendous flood damaged all link bridges and its main road and now hundred of people are compelled to cross hundred of feet height mountainous narrow way by feet and they also carrying flour, and edible things on their back. Due to sever cold weather people of the valley could not thresher their wheat crop and now they are trying to harvest the remaining wheat because most of their standing crops were also washed away by flash flood. There is no hospital no health facility in the entire valley no stock of food items and edible things and their food stock has been ended. If these besieged people were not provided food items it might be faced from starvation and human loss can be occurred on a large scale.

No relief goods nor any food were provided by the government to these besieged and affected people. While their orchard and fruit plants were also washed away by the flood. A house wife told this scribe that they plunged into 100 years old time and all of their infrastructures were damaged. Local people told this scribe that due to damaging of their main road and link bridges they were shifting an ailing lady patient to hospital by carrying them in a cot on shoulders but she was expired on her way before reaching the hospital similarly an old man was expired on his bed and we could not rushed him to hospital because of no road. These people have put pipes on the river at one place to cross it but it is so risky and dangerous that women, children, aged person and patient can not cross this temporary pedestal bridge. And that is why yesterday a old man was died on his bed without any health facility in the valley and we could dire to shift him to hospital for treatment.  Acute shortage of food items and edible things as well as non availability of Kerosene oil is an other problem of the area.

There is no electricity in the whole valley and their local micro power house was also damaged by flood. A school teacher said that his leg has been fractured in flood and now he has to go to Peshawar for further treatment but due to no road he can not do so and it is risky for his life. A number of people of the valley complained that no government official visited this area no relief good were provided them and epidemic diseases can be outbreak any time. Local people crossing the temporary bridge made from only 3 pipes by holding a rope and to support each other to save them from felling down in river. So many houses are still besieged and strained in this valley on mountainous passes but it was not possible to reach there because of no way. Bashir Ahmad a local social worker of the area told this scribe that we have no food items even in this month of Ramzan and we especially our children are badly suffering from starvation. He said that all infrastructures, cultivable land, standing crops and so many houses were washed by flood and these people have no other source of income to gain their livelihood and might it caused for human loss on a large scale if they were not supported. He appeal provincial and federal government for maintenance damaged bridges so as to restore vehicular traffic to this valley and to provide food items to besieged people so as to save them from dying by hunger.