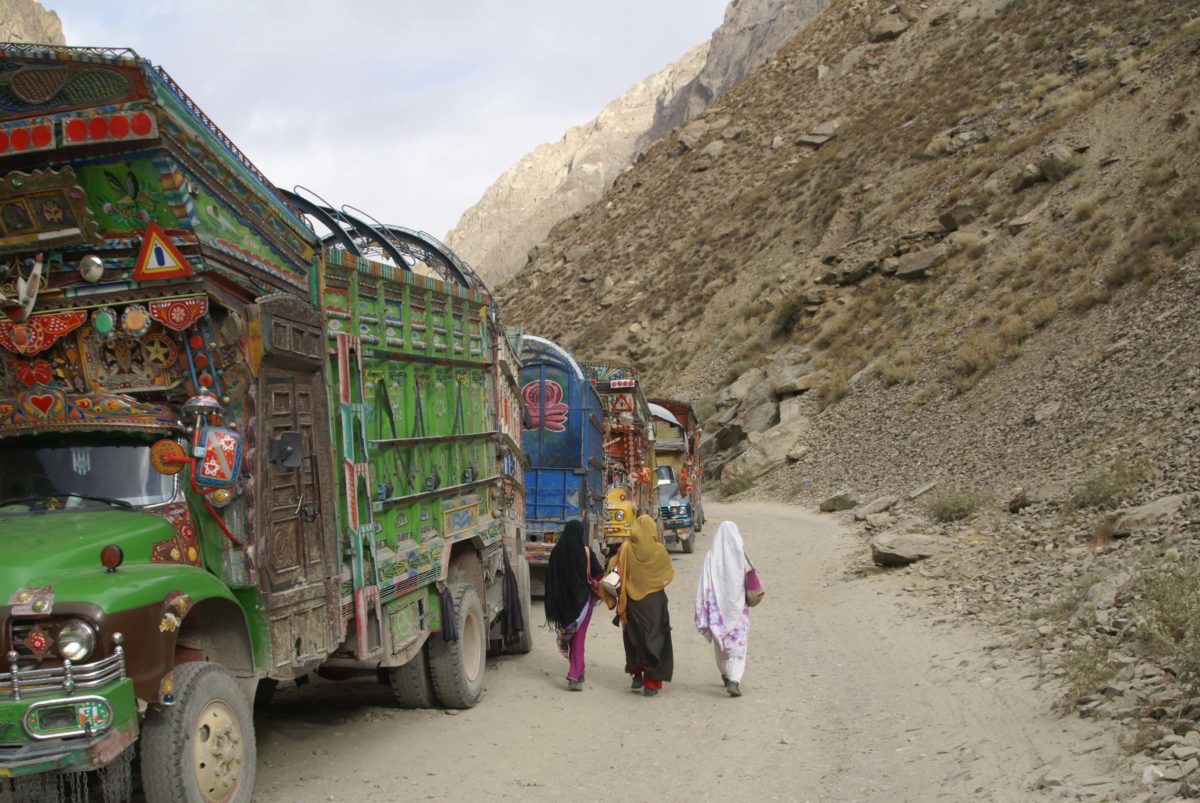 CHITRAL:  A large number of trucks illegally standing on Garam Chishma main  road waiting for their turn to load potatoes. These trucks are creating problems for local masses and traffic. These heavy loaded trucks also disturb  and harm the rough earthen roads further. Local women and girls students also complained against these drivers and conductors that they feel shy when they pass by the road. They also alleged that these drivers and conductors make their pictures by their mobiles. The local people also complained that these trucks create problems for them. When our correspondent asked the drivers that why they don,t use truck stand instead of the road.  They disclose that Mehtab Udin and others are getting Rs. 900 from them as  Truck stand tax and Rs. 200 for loading but they denied they make pictures of women and students and said they have their own mothers and sisters and they cannot even think to do so but  they said it is truth that they are in open sky on road where there is  no roof, no rest room but they are paying Rs. 900 to land Mafia  as Ada tax despite that  they are using the road as a stand.

When it was asked from Mehtab Udin and others that how they get Rs. 900 as illegal tax, all the truck stand responsible disappeared. While the local people disclose that an influential person of Garam Chishma is baking these Munshis’ and other for charging this illegal Rs. 900 from truck drivers. A senior officer of Chitral told on condition  of anonymity   said that every year 20000 to 25000 trucks come to Chitral and  every year they collect 360 million rupees from them illegally but this year only 280 million has been collected so far and till year end it be near to 360 million.

It is note-worthy if the administration collects this fee as on legal way it could change destiny of Garam Chisma and the road could be black topped by this revenue. When it was asked from DPO Chitral Ghulam Hussain he assured that he would ask his team about this and it is  responsibility  of Truck stand owners  to provide proper truck stand to them.

When it was asked from DCO Chitral Amin Ul Haq that there is no municipality in Garam Chishma  then on  whose  order this tax is imposed , he gave an innocent answer that he is not aware of this and denied  for further comments.  40000 masses of Garam Chishma demand of the government to recover this illegal tax from Mafia collected from trucks  and should to be  spend it on the betterment of the people and black topping of   Garam Chishma road and form a truck stand for these trucks as they come every year.

MPA Saleem Khan also showed his  concern  that how district administration is silent on it as this tax has been collecting from few months.