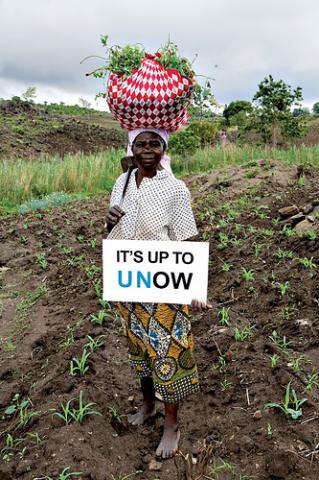 Hunger in a land of plenty maize

Calisto Phiri was on Friday at Zingwangwa Agricultural Development and Marketing Corporation (ADMARC) market for nine hours. She was told by her neighbour that ADMARC was bringing in five trucks full of maize for sale. After five o’clock in the afternoon, she knew the maize was not coming and decided just to buy from private traders who were selling at K75.00 per kilogramme compared to K52.00 per kilogramme.

Calisto had grinded the last bag of maize three days ago and the last maize flour had finished during lunch of that particular day.

Although Calisto was lucky to have food, Jenipher Phiri had stayed for two days without food in her home. She had been fed by her neighbours after the two days of hunger and when she too was told ADMARC was bringing in maize she went to Zingwangwa market. She too had no option, but to buy from a private trader who had opened the market on that day. She knew the maize she bought would not finish even for two weeks because it was expensive.

Dr. Charles Matabwa, general manager for ADMARC, said in an interview Friday that there is enough maize in all selling points. However, most selling points do not have maize, it has been established.

A survey in selling points in Blantyre, Lilongwe, Zomba and Mzuzu showed that most selling points do not have maize. Market officers in these selling points commented that they had written their headquarters requesting for maize but stocks had been delayed for reasons not known.

The chairman of the agriculture committee in parliament Dzoole Mwale said in an interview his committee had warned the government about the impending hunger saying the government did not take it seriously.

“ We visited all the areas of the country and we told them that most areas need maize and should be dispatched as soon as possible. Surprisingly, government just kept quiet hene the crisis we are in,” he said.

He therefore upon the government to act fast before loss of many lives because of hunger.

“The fact that government banned traders from buying maize is enough reason to believe that government has accepted that there is not enough maize in the country,” said Trevor Gondwe, a Mzuzu resident.

He said the government was deliberately allowing private traders to buy maize from farmers and has realized too late that most of the maize is now with private traders.

President Bingu wa Mutharika, who is also Minister of Agriculture and Food Security, directed recently that government’s arm, the Agriculture Development and Marketing Corporation (ADMARC), should be the sole buyer and seller of maize in Malawi.

The notice signed by the Principal Secretary in the Agriculture and Food Security ministry, Andrew Daudi, quotes Malawi laws Agriculture Act, Section 3 which empowers the responsible minister to take this kind of step.

Dan Kaliati, a private trader based in Madisi, said in an interview he has enough stocks to feed almost 100,000 people.

“I am not alone in this business of buying and selling. We are many of us. We cannot sell maize now instead we shall sell the stocks in February when people will have nothing. We shall sell five times higher than the actual buying price,” he said.

Grain Traders and Processors Association (GTPA) said the Presidential directive poses a challenge to traders that stockpiled the commodity after buying from farmers at a high cost.

“The directive will create [a] shortage of maize in the country because traders will rather keep the maize rather than sell it to ADMARC at a loss,” said Grace Mhango, GTPA spokesperson, who even doubted the parastatal’s capacity to buy all the maize available in the country.

Traders have been getting gluttonous with the high demand for maize in the country and have been hoarding to make ‘filthy’ profits at the expense of the poor consumers.

One of ADMARC employees who opted for anonymity said there is enough maize in some markets but lorry owners are reluctant to take them to various parts of the country because ADMARC pays late.

He also said some maize has been piled and is destined for Zimbabwe.

“So you can see that although we have enough maize, it is not accessible to people,” he said.

Despite assurances of a surplus, Malawi’s traders expect maize prices to rise later in the year and have been holding on to stocks which have resulted in higher prices of maize.

Government and food agencies projected a surplus of  3.3 million tons of maize this year  while the USAID funded Famine Early Warning Network commented that the projected figures could be lower.

While private traders are holding on to their stocks and ADMARC is failing to transport maize to selling points in need, people continue to look for maize.

“Otherwise there will be hunger while we have plenty of maize in some parts of the country,” he said.

Des Despite government assurances of a surplus, Malawi’s