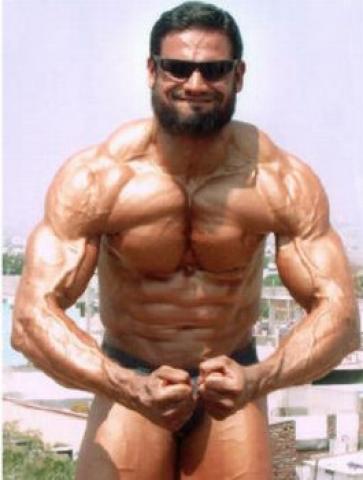 From Mohammed Siddique in Hyderabad
November 23, 2008
Mir Mohtesham Ali Khan, the acclaimed body builder from Hyderabad, has brought the rare honor to the country by winning Bronze medal at the Musclemania World Tour competition, the highly respected world bodybuilding championship in Las Vegas, California.
33 year old Mohtesham Ali Khan won the bronze in the heavy weight category of the world championship held at the Grand Hall of Golden Nugget Hotel in Las Vegas on Saturday. 6.2 ft tall Khan, who made it to top ten and then to top five on the first day of the competition gave impressive performance in the finals. The professional body builders from China and Columbia won the gold and the bronze medals.
Mohtesham, who before leaving Hyderabad last week had vowed to bring laurels to the country in the field where Indians do not have much to celebrate till now, said, “I had hoped and worked hard to leave my mark. Even then this victory is much more than what I had dreamt. Achieving something at this level of international competition is not easy”, he said over phone for Las Vegas, Nevada.
Mohtesham was however not the only bright spot for India. Prakash, another of the 8 Indians participating in the event, won gold medal in the light weight category. There were five categories in which 400 body builders from 26 countries participated in the Musclemania world championship, the leader in natural body building events in the world.
As the news of the victory of Mohtesham Ali Khan, spread, hundreds of his supporters and well wishers gathered at his residence in Hussaini Alam area of old Hyderabad and celebrated the victory. Youth took out a procession with Mohtesham’s daughters Tahera and Humaira carrying the national flag on the back of camel.
Mohtesham’s father Mir Abul Mani Khan was so moved by the good news from Las Vegas that he could not hold back his tears. “We prayed for him throughout the night as he was participating in the contest”, he said. “It is a great joy for all of us as he has brought name and honor to the country”, he said.
Mohtesham Ali Khan is the first body builder from Andhra Pradesh to compete in the world bodybuilding championship.
Mohtesham, who works in the railways and has won several medals at the national level, said that he was thankful to God and the people who supported him. “I am very happy and I dedicate this victory to my country, my people. My wish of doing country proud is fulfilled”, he said.
Mohtesham Ali Khan was the captain of 14 member Indian team, which participated in the Musclemania championship. This was again a rare honor bestowed upon a body builder from Hyderabad.
In a rare honor, a body builder from Hyderabad is leading the 14 member Indian team at the World Body Building Championship at Las Vegas in USA starting from today. Mir Mohtesham Ali Khan, winner of several titles in the country will be contesting for the Mr. World title in the heavy weight category of 90 kg plus.
Before leaving for the US, Mohtashem had told the reporters in Hyderabad that he was going with the hope and confidence of brining laurels to the country. “The record of Indian contestants at the international body building contest has not been too impressive in the past. I hope to improve it and bring laurels to our country”, he said.
Premchand Degra was the only Indian to win the Mr. Universe title in 1988. Manohar Aitch and Mantosh Roy were the other winner of different tiles but Indians drew blank during the last two decades. 30 year old Mohtesham said that he will try his best to put an end to the drought.
33 year old Mohtesham, who exercises for four and a half hour every day and whose diet costs him Rs 1200 per day, rued that the body building does not get as much encouragement and patronage in India as in the other countries including the USA. “it is a good sports which encourages the youth to stay healthy and fit. It should be encourage and mad a passion for the youth”, he said.
6.2 feet tall Mohtesham’s diet include one kg chicken, 30 boiled eggs, 12 oranges, 250 gram oatmeal, and other fruits and vitamin powder. He said that he was strongly averse to the use of any steroids and never used them in his life.
The long list of Mohtesham’s achievements includes winning the bronze at the Mr. India competition. He is also the thrice winner of Mr South India title, 8 time winner of Mr. South Central Railways, nine time winner of Mr AP and 8 time winner of Mr. Hyderabad.
For Mohtesham, another dream remains yet to be fulfilled.
“Arnold Schwarzenegger is my role model and I am looking forward to meet him"., he said.
Filed under: US, World
Share Tweet Pin G Plus Email
previous article: Obama Plans Creation of 2.5 Million Jobs
next article: Drone attacks are disgracing Pakistan Parliament