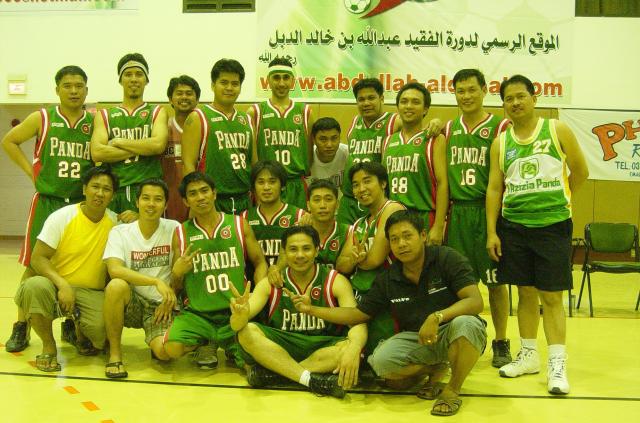 Dammam, Saudi Arabia – With a mere three weeks left before the six division championship games in this, the 23rd season of the Eastern Province Basketball League (EPBL), Hyoer Panda nailed an early final berth in the Intercompany B2 classification after beating Al Iman company 74-59. Friday at Ettifaq Club Gymnasium.
The Panda team received a tremendous boost in their quest for a comeback title with a fine performance from Saudi sensation Ahmad Ismael with 23 points, seven rebounds and two blocked shots. Marvin Francisco and Jonas Paltep also played big for the Hypermarket squad with 14 and 13 points, respectively.
Jeffrey Pangan erupted with a game high 22 points to lead Al Iman while John Baul and Bernie Morante had 10-points apiece, but they got minimal numbers from captain and main gunner James Kalaw, who had only six points in the game.
Panda led after a low scoring first quarter 12 to 9 but Al Iman exerted a big effort at the start of the 2nd period to grab the lead 27-24 on Ryan Eugenio’s basket.
Ismael then got hot with two consecutive baskets and the Panda team deployed a sterling defense down the stretch for a 10-0 run and an ultimate 21-6 stretch to put up a double digit lead entering the final period 49-35. But Al Iman was not ready to roll over and put up a tough fight to close to within eight points (52-60) with four minutes remaining. However, Panda withstood to control the game with a big contribution from Martin Fortin and Mike Viduya at the end of the period.
Al Iman will get a second crack to play in the finals if they beat the Al Bilad Team in a knock-out game after the latter emerged with a close hard-fought victory over Jarir Bookstore 69-65.
EPBL’s 23rd year is proudly sponsored by Al Falak System Solution and Consulting Company, Saudi Ready Mix Concrete Company “Green Machine”, Gulf Consolidated Contractors Company, Telemoney, Al Enaizi Enterprises Phuket Restaurant and Aling Cecile’s Catering.
In another excellent match, Kudu Restaurant took advantage in the first quarter with Danny Dangue and Arthur Herrera having a combined 18 points for an early 25-20 lead against the Leytenos team and rode on to a 104-101 upset victory in the Intercompany A Division.
The fifth seeded Kudu team joined top seeded Zahid Tractor as an early entry into the Final Four in their division. Dangue led Kudu with 25 points, Fernando Pasig had 24 points; Herrera scored 22 while Charlie Toledo chipped in with 15 points.
The second seeded Leytenos team rebounded in the second half, as their main players came off the bench, with superstar Mhec Sarabia shooting 5-of-8 three pointers to lead all scorers with 28 points, Vanni Chavero had 26, Felix Florendo had 13 and Aldwin Santos contributed 10 points off the bench.  The Leytenos star Sarabia, was outstanding in the loss.  He was bottled up for most of the fourth quarter by the defensive play of Kudu’s Ruel Pagambonan, who was inserted to shadow him.
In League A and B, Saudi Ready Mix nailed their first win with 88-79 decision against rival Dobim Tigers. The trio of Robin Santiago, Rolly Bisda and Gilbert Paragas had 30, 22 and 14 points, respectively for the win. Dobim paced by Marvin Valentin, Norman Canlapan and Timbol with a combined score of 38 points.
Filed under: Sports
Share Tweet Pin G Plus Email
previous article: RrRrRring!: Time to Wake Up — We’re Now a Fallen World
next article: Sacrificed my performance for the safety of the bank & the successor: M Y Khan