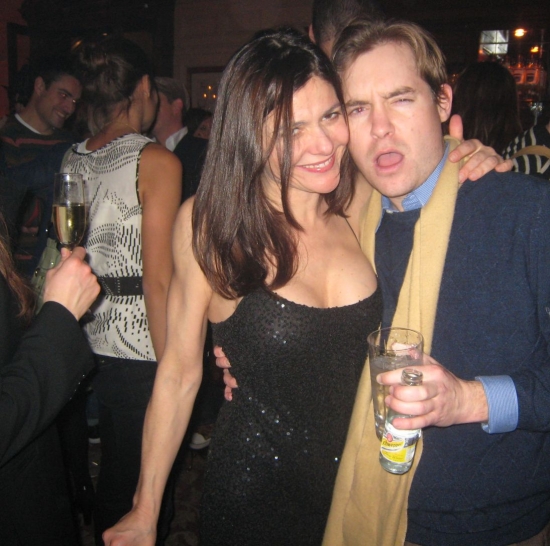 So I seem to have picked up a new hobby during my time here in .  Crashing parties. You’ve seen the work we did at the BAFTA’s, so I’m sure you are expecting grander performances. Well, we might have accomplished such a feat when fashion week made its way through last month.

Now, I’m not one to critique fashion, so it is quite unlikely that you will catch me on the front row checking out the latest useless clothing being paraded on the runway.  However, being a fan of free alcohol and models does require me to give some serious face time to the lavish afterparties.  The Marc Jacobs party was guaranteed to fulfill all my frugal fantasies.

We arrived at The Connaught in just as all the hip people started flooding the entrance. There were 3 of us, all male, with one ticket that had a female’s name imprinted on it. The bookies would give us terrible odds of getting in, but fuck it, I’m a degenerate gambler.  Never forget the cardinal rule of crashing: “What’s the worst they can do…say no?”

We were hurried through the front door with unexpected ease, although I think the fake gay accent my brother was posturing helped our cause. If that didn’t, then surely the half shirt I was wearing did the trick.

Inside the place was chaos. Gay pundits wearing pieces of clothing that you can rent for a decent price at Lucy in Disguise in . Haircuts that were lopsided enough to convince me that someone took the Bears and the points last month and the bet was to allow some malcontent midget to shear their locks. Throw in a few guys that look like girls but dressed up to look like little girls and, of course, the obligatory “sunglasses inside look” and you had the makings of a delicious fashion sandwich.

Once I had regained my composure, I set task to locate the bar. I found the drink of choice for the evening was champagne, but I requested a Vodka Tonic. How cliché of me. I did a quick run through the entire place and I realized that this was going to be a grand night. Marc Jacobs had taken over the entire hotel. There were rooms for dancing, rooms for dining, rooms for heavy drinking, and then rooms for celebrity photography opportunities. My brother, Toby and I found the dining room first and quickly realized that they were serving a 4 course meal on the house. Just grab a seat. So we did, and enjoyed single serving portions of delicacies I can’t really describe. Once satiated, we decided to scout for potential ladies of the evening. If you think about it, this should be pretty easy, right? Party full of hot female models and gay guys. I haven’t seen odds this good since the line came out giving 7 points against USC in the National Championship game. Fools.

I may have seen this on The Discovery Channel late at night some years ago, but the way male carpenter bees attract the female is through a well choreographed dance. Fuck, it works for the bees, why not me.  I cleared an area near the bar for my own private dance floor and started my experiment.  It didn’t take long before my antics lured in a female counterpart. I documented the specimen for proof.  (see pic #1)

This little bee may have queen status, or so I thought when she was whisked away by her gay worker bee/handler. Not to worry, as she made more appearances throughout the night, and not always with the same outfit on (As an aside, my brother brought back a bottle of Absinthe to the flat before we left for the night).

We decided to take our skills to the actual dance floor. Not much to look at here, so we made our own kind of party. I was feeling a little ambitious and the result was a new perspective on the female shoe.

You see, the woman’s stiletto is a powerful narcotic, carrying with it the connotation of sex and power. My brother has his own term for them, “Fuck-me” shoes. We have polled countless women about their shoes, whilst we refer to them as “fuck-me” shoes, and the vast majority have agreed with our views. For example, a leopard print stiletto heel is a prime example of a “fuck-me” shoe. When I spot a pair, I will ask their owner, “are those ‘fuck-me’ shoes?” Initially, a quizzical look is the reaction I get. Then I will supplement my question with the following statement, “I would fuck you in those shoes.” We then share a laugh knowing that we have a common understanding.

I by no means have a shoe fetish, nor am I a student of retifism. However, I may have a developing nipple fetish, and what better way to nurture that than with a nice fuck-me shoe on a nip. (see pic #2)

I don’t think models smile very much, and I confirmed this because when I took a pic of some, they didn’t smile at all. When I inquired as to why no one smiled, the ugliest one of the bunch replied, and this is a quote: “In my job, I always have to smile, so I don’t want to smile if I don’t have to.” I didn’t ask her what her job was. Woot!

So everybody there was a model and so we were always asked what the fuck we were doing there. I told them I was a foot model, but that I sometimes got my knee in the shot too. Boy were they were impressed. Look, here I am with some teen models. I showed them the look I had prepared if I ever got a job that required my face in the shot. (see pic #3)

Apparently, Kate Moss was at the party, but I never saw her. Then again, I was anywhere near the women’s restroom, so I wasn’t really trying to do cocaine with her meet her. I did however meet this guy… (see pic #4)

This guy was rocking a robe all night. He obviously stole it from his hotel room. As most of my friends know, my penchant for robes is only outweighed by my penchant for heavy robes. So I made this guy an offer for his robe. He thought about it, but declined when I mentioned the transaction had to go down immediately. Fucking pussy. Who doesn’t want to get naked at a fashion party?

The party went on late into the evening, at which point I decided I was clearly overserved and tore home solo. I met some American girls on the bus ride home, got a number and even persuaded her to come home with me. I was damn close, but her American handler Rob chased us down and retrieved her. My kidnapping skills aren’t as good as they use to be. Didn’t matter in the end, because sometime during the night I had lost my house key. I sat outside for 20 min until my neighbor let me in. She was not happy. Kidnapping rule 101: if you allow the girl time to sober up and assess the situation, it’s already over.

Stats for the night:

Filed under: Music & Film
Share Tweet Pin G Plus Email
previous article: Krush Me with Your Bangin’ Rhythm
next article: The Pasta Makers