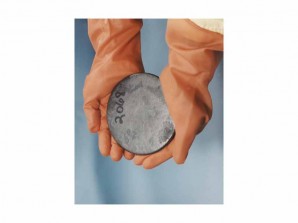 Billet of highly enriched uranium meta, that could be used to create a nuclear weapon or dirty bomb.

On June 17, 2014 Rep. George Holding of North Carolina asked for permission to address the United States House of Representatives for one minute regarding Iran’s compliance with its nuclear enrichment program:

Should a deal be reached, the most stringent compliance, verification, and notification standards must be in place, including regular reporting to Congress. As I have said many times on this floor, I firmly believe Iran has no inherent right to enrich any nuclear material and that any deal should completely dismantle their nuclear infrastructure.

A potential agreement would likely be hailed by this administration–an administration that puts politics before policy–as a foreign policy victory, which leads to an important question: Can this administration be trusted to uphold any compliance regime and fully inform Congress and the American people of even the smallest infraction by the regime in Tehran?

If Iran commits even the smallest infraction, such as installing one centrifuge above the deal’s limits, will this administration blow the whistle and jeopardize a deal in which they have invested so much political capital?

This administration has shown, most recently with their Taliban prisoner swap, that they have no problem flaunting their responsibility to timely inform and consult Congress of their actions, but with a deal like the Iranian nuclear negotiation that has far-reaching national security implications, this administration must not leave the people’s Representatives in the dark”, said Rep. Holding (source: Congressional Record http://thomas.loc.gov/).

See related article discussing the pros and cons of Iran’s right to enrich uranium (see article: Does Iran Have the Right to Enrich Uranium? The Answer Is Yeshttp://www.huffingtonpost.com/william-o-beeman/does-iran-have-the-right-_b_4181347.html).

Filed under: News, Politics
Share Tweet Pin G Plus Email
previous article: NC will give a very tough fight in Assembly Elections:Omar
next article: Rep. Sherman: “Maliki refused to enter into a long term status of forces agreement with the United States in 2006, 2007, 2008”