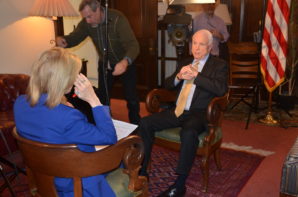 Senator McCain with Martha Raddatz during a TV interview in 2013.

“I guess this means my spring break in Siberia is off, my Gazprom stock is lost, and my secret bank account in Moscow is frozen. Nonetheless, I will never cease my efforts on behalf of the freedom, independence, and territorial integrity of Ukraine, including Crimea.”

We called his Phoenix office today who insisted the Senator’s statement was not a joke?

John McCain entered the Naval Academy in June of 1954. He served in the United States Navy until 1981.

He was the Republican Party’s nominee for president in the 2008 election.