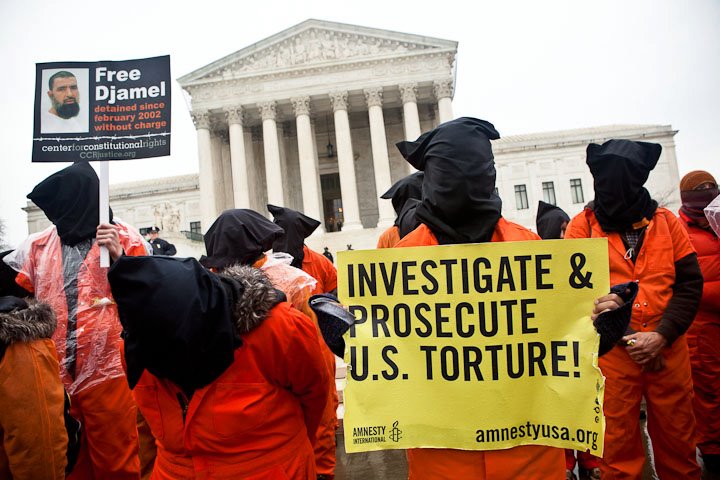 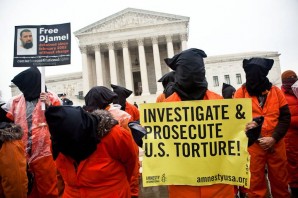 Investigate and prosecute US torture. Protesters outside the Lincoln Memorial.

On December 9, 2014 Senator MIKULSKI asked permission to address the US Senate regarding the CIA torture program:

“Mr. President, I rise today to speak on the release of the declassified Senate Select Intelligence Committee report on the CIA’s past rendition, detention and interrogation practices.

As a longtime member of the committee, I strongly support today’s release of the declassified Executive Summary, Findings, Conclusions and Additional and Minority Views of the committee’s report. With the release of this report, the American people finally have the information they need to understand the CIA’s interrogation practices that spanned 2001 through 2009, when President Obama put an end to the Bush-era program.

The CIA’s practices went against our values as Americans and damaged America’s global reputation. The committee’s report shows not only that torture did not extract the “otherwise unavailable” intelligence that some CIA officials claimed, it did not work as a policy or in practice.

I have consistently opposed the repugnance, legality and efficacy of torture. I supported FBI Director Robert Mueller’s directive saying FBI agents may not participate in torture. I have repeatedly and publicly expressed my frustration about being lied to and manipulated by some CIA officials over many years. As I said during the Intelligence Committee’s hearing confirming John Brennan as CIA Director, “I’m going to be blunt and this will be no surprise to you, sir–but I’ve been on this Committee for more than 10 years, and with the exception of Mr. Panetta, I feel I’ve been jerked around by every CIA Director.”

My views against torture have been consistent with those of Senator John McCain, whose stance against torture is particularly compelling given his own experiences as a prisoner of war. I have also supported the use of interrogation techniques as laid out in the Army Field Manual and have decried the use of contractors by the CIA in the torture of detainees.

Some people have raised concerns about the timing of the release of this report and that our enemies could use it as a pretext for violence. Long before the release of this report, however, terrorist groups made their violent intentions towards America clear. They hate America and our freedoms. They use violence for the sake of violence. No public action is without risks, whether by President or Congress, but we also risk who we are as Americans by suppressing the facts in this report.

I would like to reiterate that this report was reviewed and redacted in conjunction with the CIA and White House, and the Director of National Intelligence approved its declassification. It was a difficult process that took over a year, but we finally got to a place where the narrative of the report was adequately preserved while ensuring that CIA personnel and operations were not compromised. The DNI weighed the risks and ultimately certified the declassification of the report.

To be clear, my support for this report in no way diminishes my respect for the men and women of the CIA, who are faithfully and legally doing their duties. The CIA’s intelligence professionals put their lives at risk for our country. They deserve our support and respect.

I would like to thank Select Committee on Intelligence Chairman Dianne Feinstein for her leadership, as well as my committee colleagues from both sides of the aisle who supported this investigation. Throughout the frustrating and sometimes contentious process of producing this report, we never gave up on pursuing the truth. Thanks also to the committee staff who worked tirelessly on this report at great sacrifice to themselves and their families.

This report sheds light on a complicated episode in America’s history, but it is also a testament to the value of never giving up on the search for truth and accountability. I hope that future generations will read it, study it, learn from it and make sure that torture is never again used by the U.S. government.”