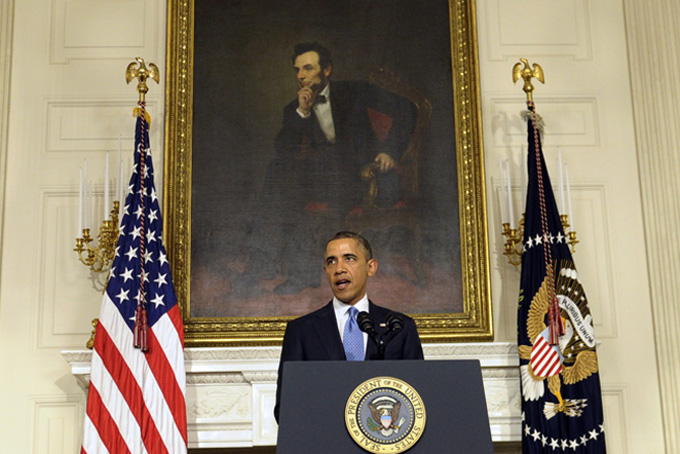 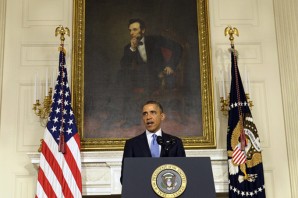 Under the watchful eye of Lincoln portrait – President Barack Obama speaks in the State Dining Room at the White House Saturday, Nov. 23, 2013, in Washington regarding the deal struck with Iran to prevent Iran from gaining a nuclear weapon.

On November 24, 2013 President Obama made comment on the deal reach between the P5+1 nations and Iran regarding its uranium enrichment program.

Here is some of what the President said:

“Today, the United States – together with our close allies and partners – took an important first step toward a comprehensive solution that addresses our concerns with the Islamic Republic of Iran’s nuclear program. Since I took office, I have made clear my determination to prevent Iran from obtaining a nuclear weapon.  As I have said many times, my strong preference is to resolve this issue peacefully, and we have extended the hand of diplomacy. Yet for many years, Iran has been unwilling to meet its obligations to the international community.”

“So my Administration worked with Congress, the U.N. Security Council and countries around the world to impose unprecedented sanctions on the Iranian government. These sanctions have had a substantial impact on the Iranian economy, and with the election of a new Iranian President earlier this year, an opening for diplomacy emerged.  I spoke personally with President Rouhani of Iran earlier this fall.  Secretary Kerry has met multiple times with Iran’s Foreign Minister.  And we have pursued intensive diplomacy – bilaterally with the Iranians, and together with our P5+1 partners: the United Kingdom, France, Germany, Russia, and China, as well as the European Union”, said President Obama (source: transcript speech President Obama http://www.theyeshivaworld.com/news/headlines-breaking-stories/202653/transcript-of-president-obamas-iran-speech.html).

Filed under: News, World
Share Tweet Pin G Plus Email
previous article: “No question in our minds that “Iran was very much involved in the brutal slaying of our Marines”, said Ronald Reagan
next article: “The outcome of the Geneva talks is a victory for all”, said Putin