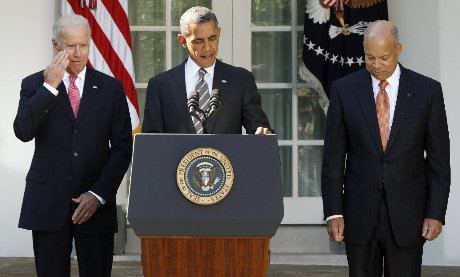 “I love this country. I care about the safety of our people. I believe in public service. And I remain loyal to you, Mr. President”, said Johnson.

On October 18, 2013 Jeh Johnson was announced as President Obama’s choice to led the Department of Homeland Security.

His acceptance speech at the press conference is as follows:

“Thank you very much, Mr. President.

As you noted, my wife and two kids are not here because it’s parents’ weekend at Occidental, and thanks to the cost of a non-refundable airline ticket — (laughter) — they could not be in two places at once.  They wish they could be here.

Thank you for the tremendous honor of this nomination and the trust you have placed in me to carry out this large and important responsibility as Secretary of Homeland Security.  I was not looking for this opportunity — I had left government at the end of last year and was settling back into private life and private law practice.  But when I received the call, I could not refuse it.

I am a New Yorker, and I was present in Manhattan on 9/11, which happens to be my birthday, when that bright and beautiful day was — a day something like this — was shattered by the largest terrorist attack on our homeland in history.  I wandered the streets of New York that day and wondered and asked, what can I do?  Since then, I have tried to devote myself to answering that question.  I love this country.  I care about the safety of our people.  I believe in public service.  And I remain loyal to you, Mr. President.

If confirmed by the Senate, I promise all of my energy, focus, and ability toward the task of safeguarding our nation’s national and homeland security.