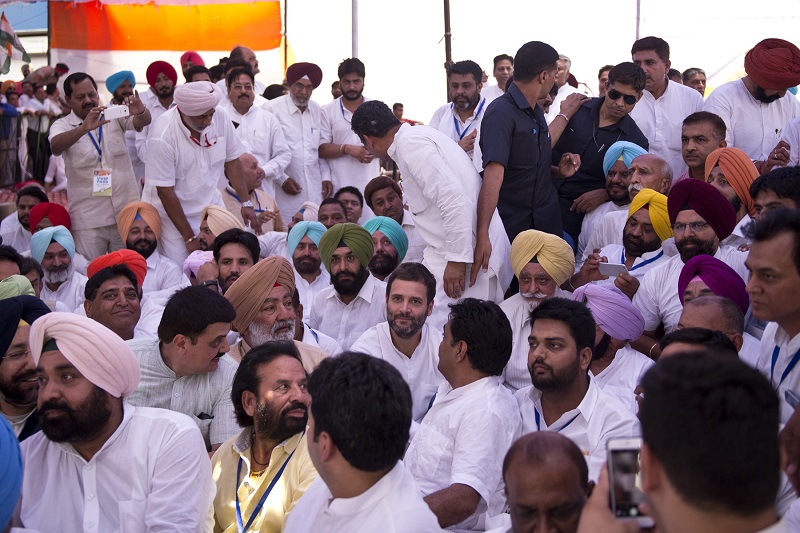 Jalandhar (GR-TYP-BIN): Addressing a protest rally in Jalandhar on June 13, Congress Vice President Rahul Gandhi said that he had first raised the drug menace in Punjab four years ago, and the SAD-BJP Government chose to ignore him and even ridicule him.

Rahul Gandhi said, “If Punjab has to progress then it must end this drug menace. There is no other avenue for progress. It appears that the only business which is thriving is the illicit drug trade. Today Punjab is reeling under drug abuse, joblessness & law and order problem, all of which is meshed together in an unholy alliance hurting the common man in the state.”

Citing the censoring of a recent Bollywood movie, Rahul Gandhi said, “The banning of ‘Udta Punjab’ shows how the Punjab Government is still not willing to accept the reality and magnitude of the problem.”

Rahul Gandhi said that the Punjab police force removed militancy and terrorism from the State. There are many honest officers who have not been allowed to function. If given the freedom to do their jobs, then they would be able to eradicate the entire drug menace in a matter of month.

Rahul Gandhi cited his experience in Bhatta Parsaul. That was not a one day fight, but a long struggle to defend the rights of the farmers. Many of his political opponents and even sections of the media mocked him, but he stood by his convictions. In the end the Congress government introduced the Land Acquisition Bill, which brought safeguards for the farmers of India. Much like how he didn’t give up on the Indian farmer, Rahul Gandhi said that he would not forsake the Punjabi youth to this menace.

Rahul Gandhi said, “The future of Punjab is being threatened as this drug menace continues unabated. But, I promise to fight for Punjab and for its youth.”