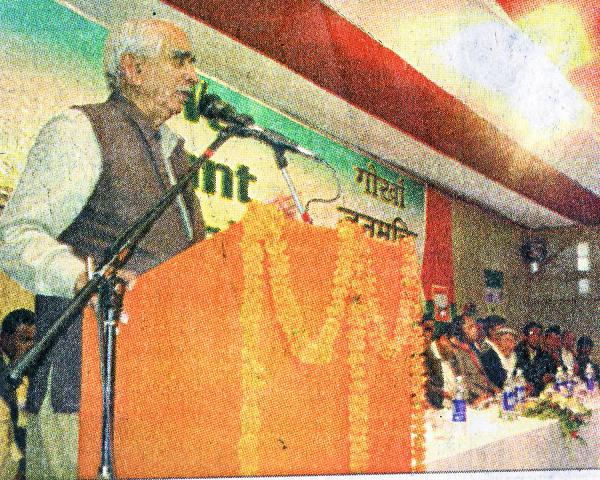 I PROMISE TO TAKE UP YOUR DEMANDS -SAYS JASWANT SINGH

The demand for a separate state of “Gorkhaland” is the only issue of the GJM. All the political parties of the hills are in stand with this demand of “Gorkhaland” and also promise to support the BJP in the upcoming Lok Sabha elections.

Today, a joint general meeting was conducted in the presence of Mr. Jaswant Singh, a member of BJP , which was held at the Darjeeling Gymkhana Club. The dignities present there were Mr. Bimal Gurung of GJM, Mr Roshan Giri of GJM, Mr B.M Rai of CPRM, Mr. R. Moktan of SNF, and many other minorities.

CPRM’s deputy secretary says that, we are supporting the GJM as well as BJP full fledged. Mr. Jaswant Singh “promises the hills people to take up their demands to Delhi” and also try to solve their problem which the hills have been facing since the last hundred years.

Mr B.M. Rai, says that the votes should not be divided and should be casted in favor of the BJP candidate Mr. Jaswant Singh. This time the political parties have also decided to campaign for BJP as a one.

On asking about this issue, Mr. Madan Tamang says to the press reporters that he was unaware of this meeting and did not receive any letters or invitation resulting to which he did not attend the meeting.

Mr. Bimal Gurung says that, he is supporting and bringing a national leader, which is a first time in history of Darjeeling Politics. All political will be called for a table conference and we will then proceed towards our aim as a one and united. Mr. Bimal Gurung also thanks the Darjeeling political parties for their support.

All political fronts are confident about that during the reign of BJP , many states were created and they also believe that during the upcoming term, a new state of “GORKHALAND” would also be created.

Filed under: Music & Film, Politics
Share Tweet Pin G Plus Email
previous article: If your date of birth is 6th/15th/24th, then this blog is for you
next article: The Plus Side of Prop 8: Continued Momentum for Gay Marriage