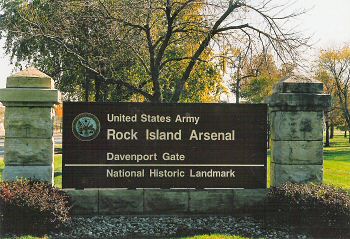 The government shutdown is adversely affecting the lives of millions of Americans – including those impacted by both the needless shutdown and military sequestration. Among the facilities being affected is Rock Island Arsenal – “the largest weapons manufacturing facility in the western world”, according to Global Security.org

On October 5, 2013 Rep Cheri Bustos of Illinois asked for and was granted permission to address the United States House of Representatives for one minute regarding the impact of the government shutdown on his constituents. What he said adds a human dimension to the story of the shutdown as it adversely affects the lives of real human beings.

“Mr. Speaker, I rise today to speak about the human consequences of this needless government shutdown, the impact of this shutdown on real people and families back in our home districts. There are so many people out there who are hurt and are worried about what’s going on here in Washington, and how can any of us blame them? Let me just give you one example.”

“I have a woman from the Quad Cities, which is an area I represent, who reached out to our office. She’s worked at the Rock Island Arsenal for 15 years, and she told me how much she loved her job, but she was furloughed earlier this year because of sequestration. Now she is out of work indefinitely because of this needless government shutdown. She is worried, like any of us would be, about how she is going to make ends meet, how she is going to support her family, and how frustrated she is with the government”, she said.

“We need to encourage good people like this woman from the Quad Cities to stay in public service, not drive them away. She is one of more than 25,000 workers at the Rock Island Arsenal who are impacted by this. I say to my colleagues on the left and my colleagues on the right, let’s work together and solve this”, said Rep. Bustos (source: Congressional Record http://thomas.loc.gov).

Note: The Rock Island Arsenal comprises 946 acres, located on Arsenal Island, originally known as Rock Island, on the Mississippi between the cities of Davenport, Iowa, and Rock Island, Illinois. It lies within the state of Illinois.

The island itself was originally established as a government site back in 1816, with the building of Fort Armstrong. It is now the largest government-owned weapons manufacturing arsenal  in the United States, according to Wikipedia. And according to Global Security – Rock Island is  the “largest weapons manufacturing arsenal in the western world” (source: Rock Island Arsenal http://www.globalsecurity.org/military/facility/rock-island.htm).