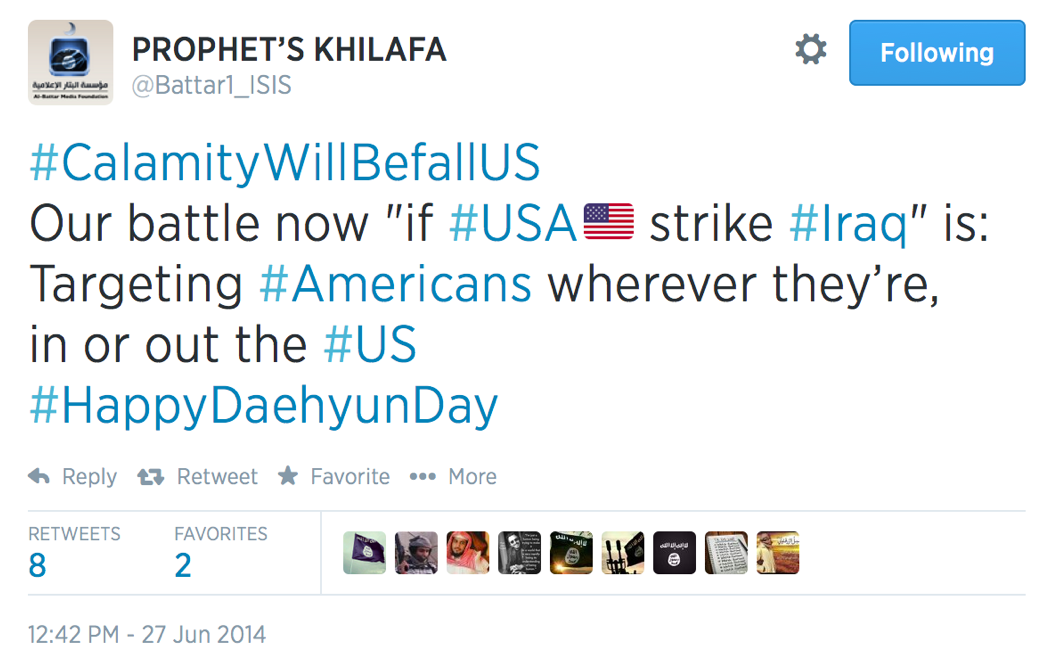 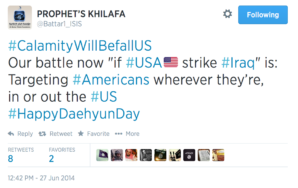 On September 16, 2014 Rep. Ann Wagner of Missouri asked for and was granted permission to address the United States House of Representatives for 1.5 minutes regarding the threat from ISIL terrorists.

The Islamic State (IS; Arabic: الدولة الإسلامية‎ ad-Dawlah l-ʾIslāmiyyah), previously calling itself the Islamic State of Iraq and the Levant (ISIL) or the Islamic State of Iraq and Syria (ISIS ; Arabic: الدولة الإسلامية في العراق والشام‎), and also known by the Arabic acronym Daʿesh (داعش), is an unrecognized state and a Sunni jihadist group active in Iraq and Syria in the Middle East. In its self-proclaimed status as a caliphate, it claims religious authority over all Muslims across the world and aspires to bring most of the Muslim-inhabited regions of the world under its political control beginning with territory in the Levant region which includes Jordan, Israel, Palestine, Lebanon, Cyprus and part of southern Turkey:

“Madam Speaker, I rise today to talk about one of the greatest threats to the United States of America and our allies. An evil that is so barbaric and ruthless that it can’t be ignored but only dismantled and destroyed. Madam Speaker, I am talking about the Islamic State of Iraq and Levant, also known as ISIL.

Many of you, many of all of us, have watched in horror as two American journalists–James Foley and Steven Sotloff–and a British citizen, David Haines, were gruesomely murdered by ISIL. As a mother and as an American, my thoughts and prayers go out to their families and to all the victims of this vile terrorist group.

Madam Speaker, ISIL is the most ruthless and well-financed terrorist group in the world. Their goal is simple: kill the innocent and ultimately terrorize the United States of America and our allies. We have an obligation, one that has been long overdue, to stop this barbaric terrorist organization before they strike us at home.

Madam Speaker, we must not let that happen. We must stand together, stand together as a Nation, a people, in a unified bipartisan fashion, to stop ISIL once and for all. Make no mistake about it, we are at war with radical Islam.

ISIL must not have a safe haven in Syria, or anywhere else, with the time and the space to operate and carry out attacks against our allies and our homeland. They must be destroyed.

As Americans, we should all want the President to succeed. The cost of failure is far too great. However, the cost of not acting is even greater. The President’s rhetoric must match his action and his resolve.

Madam Speaker, Congress will answer the call of the American people and give the President the tools that he has asked for while providing rigorous oversight and requiring accountability for the duration of this military campaign. We must complete the mission.

I, for one, stand ready to work with anyone to defend our national security and protect our very way of life.”

Filed under: Military, News
Share Tweet Pin G Plus Email
previous article: An Alternative to Alzheimer’s Disease
next article: ISIL represents an “evil that is so barbaric and ruthless that it can’t be ignored”, said Rep. Wagner