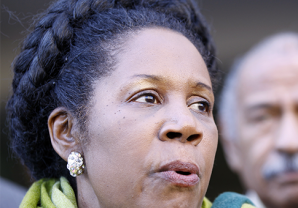 “Mr. Speaker, I have always viewed the budget document that is produced by this House and the Senate and the President as a moral compass of America’s commitment to her people”, said Rep. Jackson Lee.

On April 7, 2014 Rep. Jackson Lee of Texas asked for and was granted permission to address the United States House of Representatives for one minute regarding the Republican budget:

“Mr. Speaker, I have always viewed the budget document that is produced by this House and the Senate and the President as a moral compass of America’s commitment to her people.

That is why I rise with such great disappointment on the Republican Ryan budget in that today, as we speak in the Rules Committee, we are gutting investments in education, scientific research, advanced manufacturing. We are cutting from those vital transportation investments by over $52 billion when we have crumbling highways and crumbling dams and crumbling infrastructure. We are slashing $145 billion from the very heart of our children’s opportunity for education out of the Pell grants, providing millionaires with over $200,000 in a tax break, ending Medicare as we know it by vouchering it–almost like the privatization of Social Security–and cutting Medicaid by $732 billion, then ending the opportunity for Americans to have access to affordable health care, preventative health care, so as to be able to allow those who need health care to have it–to avoid being a third world country.

There are 25 million Americans who need access to health care. Let’s get a better moral document and reject this present Republican budget”, Rep. Jackson Lee.