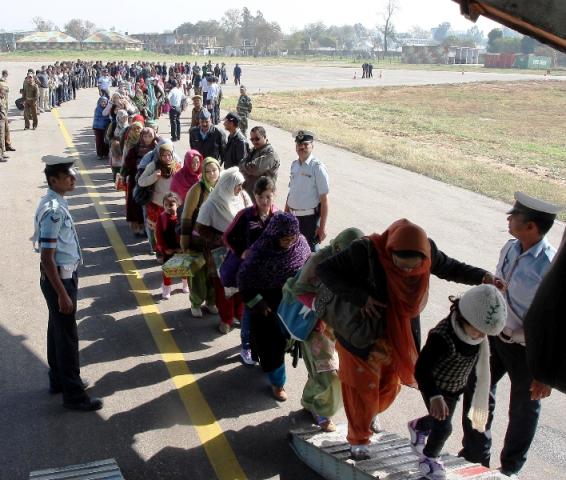 The state government had earlier announced that special IAF sorties would be arranged for stranded passengers of Leh region which remains cut off due to heavy snowfall on the  and Kargil-Padum road that connects the cold desert Ladakh region of the state with the Valley.

In a sortie from Air Force Station Jammu to Leh, IL-76 carried 200 civilians including 12 children and 82 ladies. Another IL-76 had carried 142 civilians from air field to Leh today.  “ Due to inclement weather condition two more sorties were suspended” said Air Commodore Nitin Sathe, Air Officer Commanding of Air Force Station Jammu who personally supervised the entire air lift operations from air field. He also said that IAF is ready and will carry out the task immediately with coordination with civil admin of J&K as soon as weather clears

Haji Mohammad Hassan who was a 65 years old and a resident of Baro Colony, Chiktan said that “he came for medical treatment at Govt. Hospital and then stranded here in Jammu for last 17 days”. While asking about the problems to Mrs. Najuma Batool who was with her 11 year old daughter Reshana of Pashkumn said that now we had a sigh of relief. She also said that “ I on behalf of all people of Leh region thanked Indian Air Force who becomes life line for every Leh citizen during winter”.

During airlift operation,  Chief Administrative Officer Group Captain Shashikant Pati and Security Officer Wing Commander TM Reddy worked tirelessly with full support from civili administration of J&K for smooth movement of the civilian people without any hassle. Fida Hussain who was 52 years old from Karkaich of Leh thanked Air Force and J&K Govt for their hassle free movement during on board the aircraft.