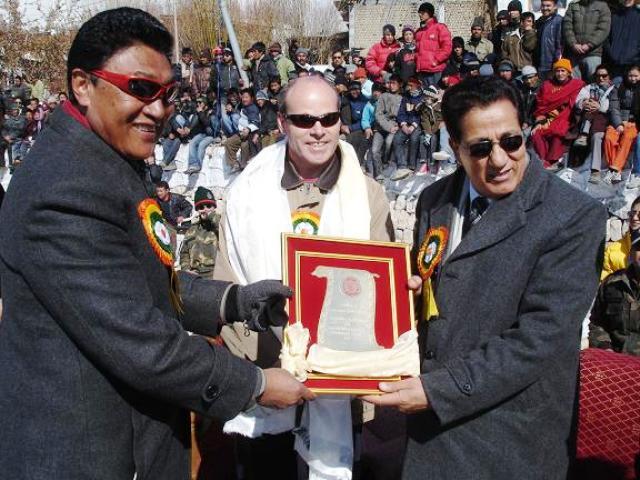 on Saturday said that the Government was determined to upgrade sports infrastructure, including,  Ice Hockey Rink and existing Stadium and playfield in the mountainous district.

The Minister was speaking at the concluding function of Third CEC Men’s Ice Hockey Championship, 2010 at Ice Hockey Rink Karzoo Leh in Ladakh..

Giving details about the steps being taken by the Government,   he said that Ice Hockey Rink is coming up at a cost of Rs.7.71 crore at Leh of which Rs. 3.42 crore is available under PM special package. He hailed the Chief Executive Councilor, LAHDC, Leh  Cherring Dorji for taking personal interest in holding 3rd Ice Hockey Championship, 2010 and appreciated Department of Youth Services and Sport, Leh and Ladakh Winter Sport Club, Leh.

The Minister expressed his gratitude to all those organization and departments who coordinated with Youth Services and Sports Department in organizing the Ice Hockey Championship on behalf of Chief Minister,  Omar Abdullah and said that inspite of his busy schedule, the Chief Minister witnessed the final match of 3rd Ice Hockey Championship, 2010.He congratulated the Winner and runner up teams and all the participants for exhibiting their talent.

In his address,    Chhering Dorji said that despite shortage of infrastructure in Leh district,    Ice hockey was organized in the district within a short period of time adding that the  credit of introducing Ice hockey game in the district goes to Ladakh Scouts  .

The Chief Executive Councilor, Leh, said that 13th Finance Commission have approved 100 crore for Leh district, out of which Rs. 25 crore is earmarked for sports infrastructure.

Referring to the construction of Ice Hockey Rink in Leh, the CEC hoped that 4th CEC Ice hockey championship would be played in the new stadium. He thanked the Minister for Youth Services and Sports  R. S. Chib, Minister of State  Javaid Ahmad Dar and Canadian Deputy High Commission  Jim Nickel,,   for attending the function and encouraging the sports person.

The Minister of State for Health, Medical Education and R&B  Javaid Ahmad Dar also spoke on the occasion and appreciated the efforts of Youth Services and Sports department and Ladakh Winter Sports Club, Leh for organizing the Championship and congratulated the ITBP and LSRC and all other participants in the championship.

The Championship   was lifted by ITBP team by defeating Leh Scouts   by 2-1 goal in an exciting and interesting final match.  . No team  could  score any goal within the limited time and the match was decided on penalty shots. The ITBP team scored two goals while LSRC team score only one.