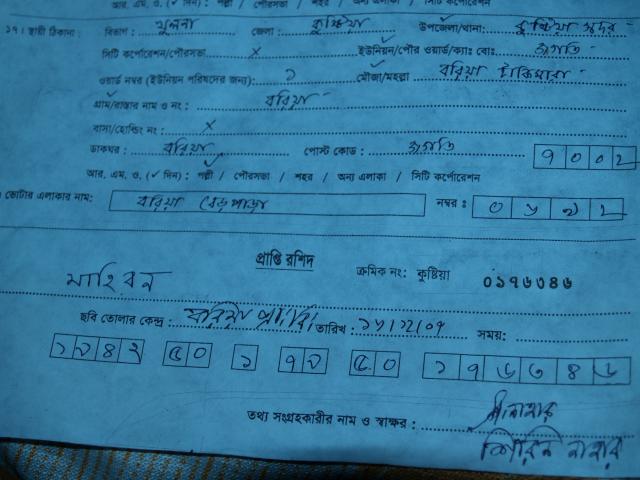 I wanted to thank Bangladesh Elections Commission and Major General Shafiqul (Military Secretary ) of the Bangladesh Army to make Bangladesh Voter Registration Project a success story for Bangladesh and placing Bangladesh on the world map by getting ID Outstanding Achievement Award.
Previously all other government project related to Voter Registration  in Bangladesh turn out to be a failure and wasting Bangladesh Tax Payers money for nothing, only this project became a success because it was handled by Bangladesh Army.
Personally I visited last year December 2007 remote village in Bangladesh to capture some pictures on Bangladesh Voter Registration Process and I am attaching those pictures on this mail. Our next project should be how we handle this national ID database and making good use of it for Bangladesh National Development.
ID World Conference this year really put Bangladesh on the map having won 2 out of 5 distinguished global awards on offer.
The award announcement and the names of all the winners are available in this link : http://www.idworldonline.com/?idpa08

Major General Shafiqul is Military Secretary of the Bangladesh Army, which has co-managed the Bangladesh Voter Registration Project with the Bangladesh Elections Commission. The project was launched to prepare biometric-based voter lists and issue national ID cards, in preparation for Bangladesh’s general elections to be held in December of 2008. The Army stepped in to assist in enrolling the citizens into the database with all the relevant biometric and biographical data, completing the mammoth task of registering more than 80 million voters with their photographs and fingerprints in just 11 months. In addition to helping ensure full and fair elections, the ability to verify one’s identity provides citizens access twenty-two different services managed or offered by the government.