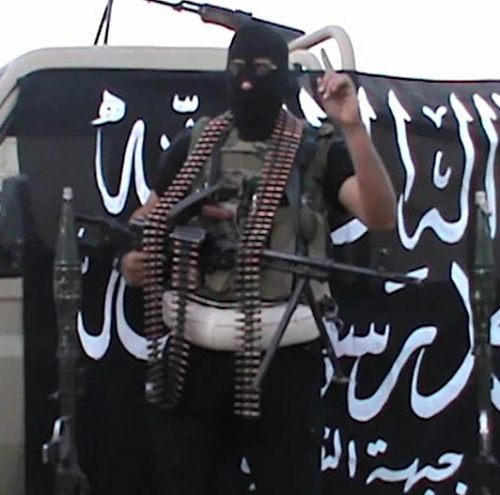 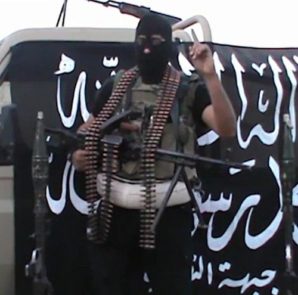 If the President continues his policy of arming the rebels, I fear we are necessarily allying ourselves with al-Qaeda. I do not support this and have introduced legislation (S. 1201) that would require Congressional approval before military assistance could be provided to groups in Syria”, said Senator Rand Paul in an email communication to Tilford, dated December 18, 2013. Pictured here: An al-Qaeda fighter in Syria 2013.

On December 19, 2013 I received an email communication from a trusted friend and confidant  Senator Rand Paul of Kentucky regarding the ongoing Syrian war situation.

Here is exactly what he said:

Thank you for taking the time to contact me regarding United States intervention into the Syrian civil war. I appreciate hearing your thoughts on this important issue.

Pro-democracy protests in Damascus began in early 2011 against the government of Bashar al-Assad. His government responded with violent crackdowns. Over the next few months the conflict spread throughout the country and degenerated into civil war. While the conflict might have started with pro-democracy protesters, in this civil war, there are no clear allies. On March 17, 2013, General Martin Dempsey, Chairman of the Joint Chiefs of Staff stated, “I am no longer sure that the United States could identify the ‘right people’ in Syria.”

The government of Syria has a long history of sponsoring international terrorism and was listed as a state sponsor of terror by the U.S. Department of State in 1979. Under Bashar al-Assad, Syria has continued to provide overt aid and comfort to violent extremist groups such as Hamas, Hezbollah, and several factions of the Palestine Liberation Organization. Unfortunately, the makeup of rebel forces has become increasingly complicated. Many of the rebel groups have ties to organizations that support terrorism across the globe including al-Qaeda, the terrorist group that attacked us on Sept. 11, 2001.

The President has vacillated in determining what the U.S. policy toward Syria should be. Speaking to reporters in 2012, President Obama announced that the use of chemical weapons would be a “red line” for him, and would force U.S. intervention. In April of this year, reports of chemical attacks surfaced. In August, rebel forces accused Assad of another chemical attack near Damascus that killed hundreds of people, including women and children. President Obama came to Congress seeking authorization for the use of military force against the Syrian government.

I sympathize with the Syrian people fighting to get out from under Assad’s years of brutal dictatorship, but the President has not made a compelling case for U.S. intervention, and has even admitted there is no military solution to the Syrian conflict. Unfortunately, there are no clear allies for the United States. Becoming militarily involved in this civil, sectarian war, produces no good outcomes for the U.S. and is likely to increase the potential for further conflict in the region. If the President continues his policy of arming the rebels, I fear we are necessarily allying ourselves with al-Qaeda. I do not support this and have introduced legislation (S. 1201) that would require Congressional approval before military assistance could be provided to groups in Syria.

In early September, during the Senate Foreign Relations Committee hearing on a resolution to authorize the use of force in Syria (S.J.Res.21), I asked Secretary of State John Kerry what the outcomes of a U.S. military strike are likely to be. I asked what the likelihood of the chemical weapons being used again, or falling into the wrong hands, might be. I asked what the goal of the strike was and if it was likely to improve the conditions of Syrian Christians. Sec. Kerry was unable to give a clear answer to any of these questions. It reminds me of Winston Churchill’s caution to those about to go to war, “once the signal is given, he is no longer the master of policy but the slave of unforeseeable and uncontrollable events.” The Founders knew this, and our own military veterans know it still. War is horribly unpredictable, it cannot be entered into lightly. The U.S. should only go to war when there is no other choice and for no other purpose but full and complete victory.

The decision to go to war, no matter the magnitude or duration, is the heaviest of burdens a statesman can carry. Such a thing must be carefully considered, the debate robust, and ultimately the decision of the American people through their elected representatives. Prudently, the Founders gave the power to declare war to Congress, as James Madison wrote, “The constitution supposes, what the History of all Governments demonstrates, that the Executive is the branch of power most interested in war, and most prone to it. It has accordingly with studied care vested the question of war in the Legislature.”

I have vigorously opposed going to war with Syria because there is no clear American interest or certainty that U.S. involvement, of the kind for which the President sought approval, would improve the situation. Instead it is likely to end in stalemate making a tragic situation worse.

The Senate Foreign Relations Committee voted 10 to 7 with one abstention in favor of authorizing military intervention in Syria. However, the resolution was not brought to either the Senate or the House of Representatives for a final vote.

As a member of the Senate Foreign Relations Committee, I will continue to closely follow the situation in Syria. Thank you again for taking the time to contact me. It is an honor and a privilege to represent the Commonwealth of Kentucky in the United States Senate. Please do not hesitate to contact my office regarding any other federal legislative issues.

Filed under: News, US
Share Tweet Pin G Plus Email
previous article: “I sympathize with the Syrian people fighting to get out from under Assad’s years of brutal dictatorship”, said Rand Paul
next article: “The President has vacillated in determining what the U.S. policy toward Syria should be”, said Senator Rand Paul