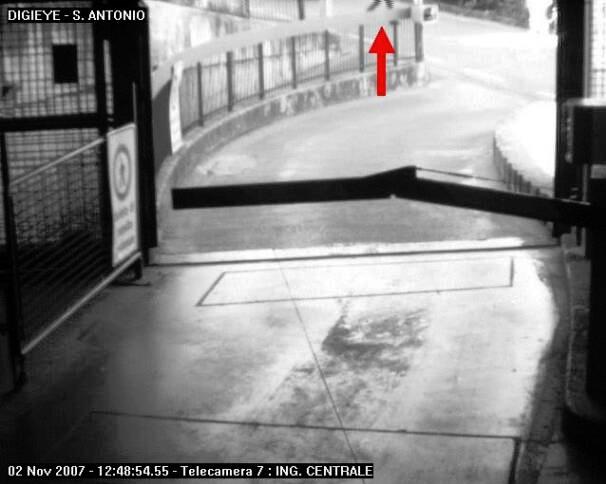 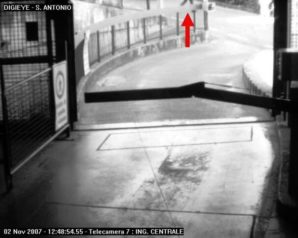 THIS PHOTO IS FROM THE PARKING GARAGE CCTV CAM SHOWING AN OFFICER ENTERING THE CRIME SCENE DRIVEWAY AT APPROXIMATELY 1 PM, WHICH WAS 10 MINUTES AFTER RAFFAELE CALLED THE POLICE

…The following are my opinions, based on what I have learned about this case during the past four years, along with information from the English translation of Judge Massei’s motivation report, issued following the conviction of Amanda Knox and Raffaele Sollecito, for the murder of Meredith Kercher on Nov 1, 2007, a student residing in an apartment in Perugia, Italy, with three other young women, one also a student, Amanda. Also information is gathered from Judge Micheli’s motivation report, issued after it was determined Amanda, and Raffaele would stand trial for the Murder of Meredith. The two reports contain conflicting information.

During the hearings leading up to the conviction of Amanda and Raffaele on Dec. 4, 2009, the prosecution addressed the court, claiming Raffaele first called the police after the police already arrived at the crime scene. This was a lie and many lies were fabricated to support this lie.

The morning following the murder one of Meredith’s phones was found in a garden, and delivered to the police post. Later her second phone was found in the same garden at 12:07 pm as it was ringing. The police said they knew of the second phone found at approximately 11:50 am and dispatched police officers to Meredith’s apartment at noon to investigate about the phones (the murder was not known about at this time). The police didn’t actually know about the second phone found until approximately forty five minutes later when it was delivered to the police post. The phone records, and the testimony of the person that found the phone as it was ringing prove the police lied about what time the officers were dispatched. On top of all this the police blacked out their log entries for the morning the phones were found. The police were telling these lies, and blacking out log entries to support the lie that Raffaele called the police after the police already arrived.

Oggi magazine (2009) reported the investigators stating that the timer for the motion activated parking garage CCTV cam which viewed the driveway to the crime scene was found to be set 10 minutes slow. The police later changes this to 10 minutes fast to support the lie that Raffaele called the police after they already arrived. The defense used phone records and and photos of the police cars arriving at the crime scene to prove the cam timer was actually approximately 10 minutes slow, as the police first stated.

The CCTV cam photographed the police entering the crime scene driveway on foot 10 minutes after the phone records prove Raffaele called the police.

These are just a few of the lies/time manipulations used to prosecute Amanda and Raffaele.