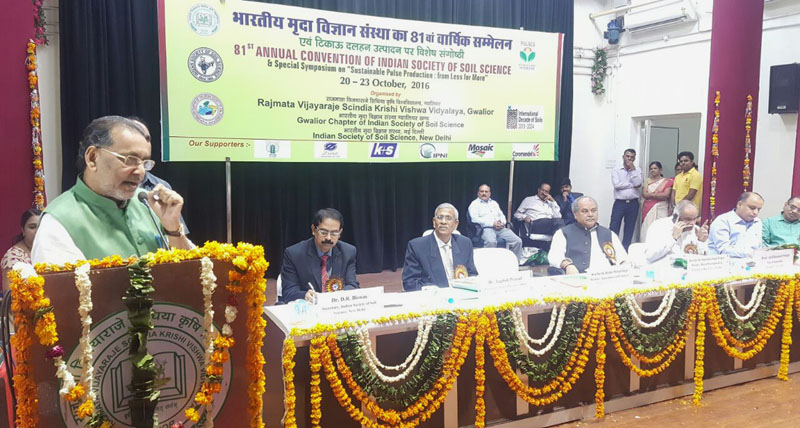 ‘Sustainability Of Production In Pulses And More Crops With Low Resources’

Gwalior (PIB-GR-TYP-BIN): Union Agriculture and Farmers Welfare Minister, Mr. Radha Mohan Singh has said that if we desire to change the destiny of India we will have to change the rural scenario. He said that the greatest problem we are facing in the present perspective is how we should provide advanced technology and recent inventions to the farmers. The first revolution in agricultural sector erupted in the West based on maximum availability of water. Now we require another revolution which will commence from the East namely India, He added.

The Union Minister of Agriculture was speaking today in Indian Soil Science Institute’s 81st Annual Conference at the Rajmata Vijay Raje Scindia Agriculture University, Gwalior on Oct 20. The soil scientists from the nook and corner of India are participating in this conference which will be on for three days. The central theme of the conference is “Sustainability of Production in Pulses and More Crops with Low Resources”.

The Union Minister said that the fundamental natural resources in Indian agriculture sector like availability of big holdings as well as water is going to be reduced. He also added that the unexpected change in climate triggered low yield in the crops leading to economical loss to the farmers.

Mr. Radha Mohan said that we are required to reduce the cost of agriculture and balance the use of fertilizers and water. Timely sowing process, solution of pest related disorders and required techniques are to be used. This is the best scientific modus operandi for sustained agriculture. The prominence of rain fed farming, increasing population, unabated use of land, deterioration in natural resources resulting in ecological imbalance is leading to the decreasing agricultural production. He said that we will have to find out cost affective innovative environment friendly situation for durable farming.

The Agriculture Minister laid the foundation of Unified Apiculture Development Centre in Agriculture Science Centre, Morena. He said that apiculture is a good source of income for agricultural labourers as well as farmers. This is very much conducive in increasing the income of farmers. He also said that apiculture does not require any sophisticated technology, capital in abundance as well as any systematic infrastructure and it gives more margin in income.