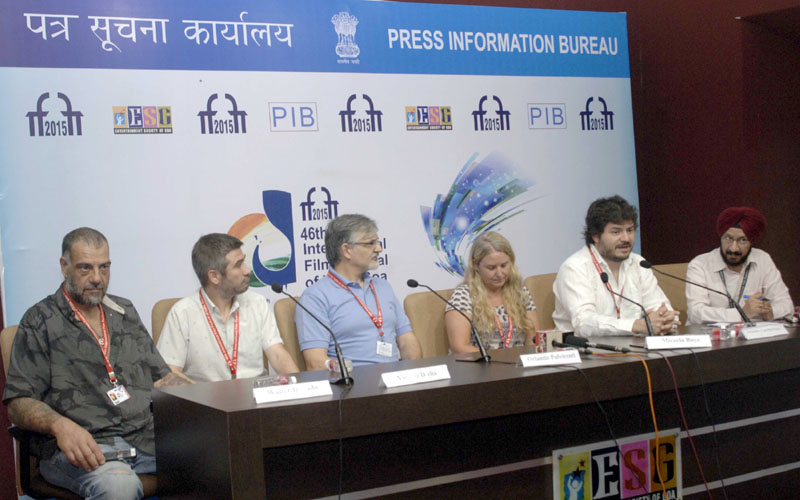 The cast and crew of the Closing Film ‘The Clan’ at a press conference at the 46th International Film Festival of India (IFFI-2015), in Panaji, Goa on November 29, 2015.

True Story Of The Puccio Family

Panaji (PIB-GR-TYP-BIN): Argentine film industry has grown many fold in the recent past, producing 115 films last year, said Alejandro Carrillo Penovi, Editor of the Closing film ‘El Clan’. Interacting with media persons at IFFI-2015, on November 29, he said that they were happy at the selection of ‘El Clan’ as the closing film of the Festival. Mr. Penovi further said that compared to Indian cinema, the Argentine film industry was much smaller, but they too do produce very good movies.

Talking of film ‘El Clan’, he said that a novel idea ‘Good is bad and bad is good’ was experimented in the film to keep the audience interest alive throughout the film.

Vicente D´elia, the Sound Designer and Micaela Buyi of the Production Company K&S Films were among the crew who interacted with the media.

Synopsis: Argentina in the 1980s. Within a typical family home in the neighborhood of San Isidro, a sinister clan makes its living off kidnapping and murder. Arquímedes, the patriarch, heads and plans the operations. Alejandro, his eldest son, is a star rugby player. He identifies possible candidates for kidnapping; his popularity shields him from suspicion. All the family members are accomplices in this dreadful venture as they live off the large ransoms paid by the families of their victims. Based on the true story of the Puccio family, this film takes place in the final years of the Argentine military dictatorship and incipient return to democracy.