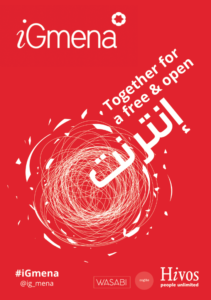 The Internet Governance in the Middle East and North Africa (iGmena) program held its first-ever Summit in Tunis, Tunisia, from 30 September and to 2 October. iGmena is an initiative of the Hague-based Humanistic Institute for Development (Hivos) (www.hivos.org), which was hosted by Wasabi (www.wasabi.tn), a media & communications company and iGmena’s local partner, at Cogite Coworking Space (www.cogite.tn).

iGmena from its inception in 2012 has been on the forefront of developing and reinforcing knowledge as well as building capacity on Internet governance in the Middle East and North Africa (MENA). iGmena Summit 2016 invited our alumni, partners, program contributors, and other regional collaborators to take stock of the work we have done so far and learn from their experience with iGmena so we can create a more effective and sustainable program. Over three days, more than 75 human & digital rights activists, journalists, technical experts, nongovernmental organizations, Internet governance professionals, and other stakeholders came together – many meeting for the first time in person – to share their work with the community, reflect on the achievements of the program, and formulate relevant steps and strategy for the next four years. This included sharing their perspective about the program openly with the community, discussing how iGmena can support them in the future, and how to strengthen Internet governance as well as civil society in the MENA region.

Presenters and speakers discussed various topics concerning Internet governance in the region, from Internet law and policy to censorship and free expression online. Some of the topics discussed included Iran’s cyber army, digital media literacy, crowdmapping, the state of digital freedom in Iraq, circumvention tools, and ways to strengthen Internet-related policy development in the MENA region.

The Summit culminated on the third day with two sessions, one on the future of Internet governance in the region and the other exploring how civil society in the region can contribute to creating a more open and free Internet. Members of the public were invited on the third day to join the discussion as well. Speaking about how civil society can better engage with government, former Tunisian Constitutional Assembly member Noomane Fehri, stressed: “If Internet governance stops, the whole world would stop. My skills and the relevant laws were not up to date to deal with 21st century governance issues.” Moreover, former Tunisian minister Slim Amamou highlighted the importance of civil society in bringing stability to legal and policy frameworks, which ultimately positively impacts the local, regional, and international Internet ecosystem. Speaking on behalf of Index on Censorship, Melody Patry said the experience of civil society in the MENA region can have a snowball effect or a chilling effect that can also impact policy as well.

Reflecting on the Summit, iGmena alumnus and Summit contributor Ahmed Esmat said: “Attending iGmena Summit 2016 allowed me to understand how the Internet governance arena in the MENA region is functioning. The Summit expanded to include topics like media literacy, the need to create local content, and outlining sustainable business models. The speakers at the Summit came from different backgrounds that enriched the discussions and insured that everyone is included.”

iGmena Program Director Hanane Boujemi echoed his sentiments. “We have often brought segments of our community together at various Internet and technology-related fora in the MENA region, but this was the first time we brought everyone together. The resulting exchange of ideas and potential collaboration gives us a lot of hope for the future. It was definitely a valuable and enriching experience, and I hope we continue to grow and thrive in the time going forward.”