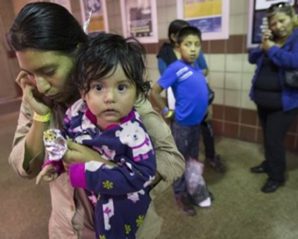 “In recent weeks, there have been many news accounts reporting that we have had an explosion of unaccompanied juveniles coming and crossing our borders, largely from Central America, from the countries of Guatemala, Honduras, and El Salvador. This population has overwhelmed facilities that we normally use to house people that have entered our country illegally, and military facilities have now been used, pressed into service, to deal with this population”, said Rep. Cole. Pictured here a desperate illegal immigrant with baby in Arizona.

On June 18, 2014 during a debate on the Department of Defense Authorization Act 2015 the issue of undocumented illegal immigrant children was brought up by Congressman Cole of Oklahoma?

What he said was rather sobering considering the context of the conversation and media reports headlining news agencies and newspapers across this nation dealing with this very subject – whats odd is that you would find it discussed within the context of a Defense bill:

“Mr. Chairman, I want to be the first to acknowledge that this legislation may not indeed be the appropriate place in which to address the issue raised in the amendment. But I do believe the amendment is an appropriate way to highlight a problem that simply must be addressed by the President and by the Congress.

In recent weeks, there have been many news accounts reporting that we have had an explosion of unaccompanied juveniles coming and crossing our borders, largely from Central America, from the countries of Guatemala, Honduras, and El Salvador.

This population has overwhelmed facilities that we normally use to house people that have entered our country illegally, and military facilities have now been used, pressed into service, to deal with this population.

In full disclosure, one of those facilities happens to be in my district, Fort Sill, Oklahoma, the home of the Field Artillery School.

But other facilities have also been used, at Ventura, at Lackland Air Force Base in Texas, and the State of Washington, and still others are being considered.

I am concerned about this for three reasons. First, these military facilities are absolutely inappropriate places to house this particular population. They are not designed for that purpose. They are not equipped for it. They have gotten very little notification of it. It is simply the wrong place to put folks.

You don’t bring outsiders onto a military installation who have no business being there and, in addition, also their caretakers.

Second, while much of the expense will be picked up by other various departments of government, it will inevitably cause some expense and some inconvenience to the Department of Defense at a time when we have a very strained military budget.

Lastly, while we are told that these facilities are going to be used only on a temporary emergency basis, there is, indeed, the risk that they could become permanent, something I think that would create a confusion of missions on military bases, not to be avoided.

We need to address the cause of the flow, not simply manage the flow better, and we shouldn’t use military facilities in that process.

I would submit it is actually the result of a policy failure. We are essentially incentivizing the flow of this population by not returning the unaccompanied juveniles to their countries of origins quickly.

Indeed, once they arrive in the United States, we try to find sponsors for them in this country, and they effectively stay here permanently.

That is not what we do, by the way, with Mexican juveniles. If you are a 16-year-old illegal immigrant from Mexico, we return you immediately, and we have had no similar spike in that particular population coming across the border.

What we are doing may appear to be humane to the juveniles in question. It is actually not. First, we are disrupting the countries from which they come. We are destabilizing those countries by incentivizing this flow.

Second, these young people don’t just walk across Mexico. They are transported by cartels, by criminals. It is the same people who bring drugs into our country, and they are making an enormous amount of money, and we are strengthening them by incentivizing this flow.

Finally, the young people themselves are at an enormous risk during the process of transportation. They are being brought across the length of a country–Mexico–in the company of criminal elements, very unsavory elements, and they are very much at risk.

I think we need to stop using military facilities for this purpose and to, frankly, begin to return people to their countries of origin. In my view, that would actually stop the flow and remove the incentive to come”, said Cole.