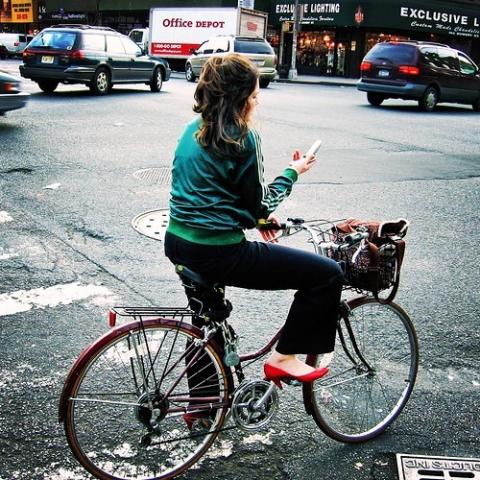 Posted by Cara McDonough to findingDulcinea

In hopes of preventing text-related accidents, Illinois is considering a bill that would outlaw using wireless devices while crossing the street.

The legislation, HB 4520, was introduced in January by Rep. Ken Dunkin, D- Chicago, who said: “This legislation is not laughable. On the surface it’s like, ‘Oh wow, what is this?’ But it’s becoming more and more of a common problem with people haplessly crossing an intersection and almost killing themselves.”

The practice has resulted in people to walking into bicyclists, in-line skaters and even moving vehicles and doctors, as well as lawmakers, are taking note. This week, the American College of Emergency Physicians issued a public warning against the dangers of texting while walking.

“Text-walking” is a form of multitasking, the Chicago Tribune reports. The brain is capable of concentrating on more than one thing at a time, but “it’s a delicate balancing act. All it takes is one unexpected disruption to turn a text-walk into a garble-stumble.”

A British organization publicized the text-messaging-while-walking problem earlier this year when it released a video clip that showed Londoners bumping into lampposts and other objects while sending text messages from cell phones and BlackBerrys.

But knowing the hazards doesn’t seem to be enough to stop habitual text-walkers. Perhaps legislation will.

“Of course I do it. I’m pretty careful. I try to be,” said Illinois resident Kelly Scheiner. But I’m sure I’ve hit someone or something once or twice.”

Filed under: Lifestyle
Share Tweet Pin G Plus Email
previous article: Transporters on strike in N.W.F.P
next article: South Korea got first beef shipment in last 5 years from US