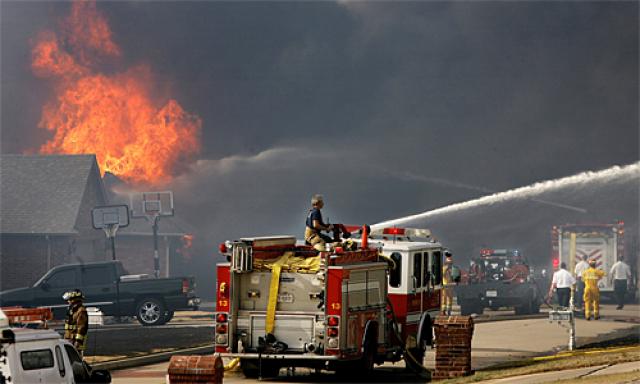 Midwest City, Okla. — Fire crews in Oklahoma and Texas raced Thursday to control wind-whipped wildfires that destroyed dozens of homes, forced evacuations and shut down parts of a major highway.
Howling wind that had gusted to more than 50 mph grounded air-based firefighting efforts in Oklahoma and drove blazes that scorched neighborhoods like "a war zone," Midwest City Police Chief Brandon Clabes said.
A fire ignited by a broken natural gas line blackened vehicles and destroyed about 25 homes in this suburb southeast of Oklahoma City, Clabes said.
"The wind is the biggest issue, because we can’t get ahead of the fires," Midwest City Fire Marshal Jerry Lojka said. The National Weather Service said wind gusts still topped 40 mph by Thursday evening.
Oklahoma County Sheriff John Wetsel said an estimated 100 homes or other structures were damaged or destroyed in northeast Oklahoma County, which includes Midwest City.

Two small towns in Texas also were devastated by wildfires. Sunset and Stoneburg in Montague County were left in a heap of after several dozen homes were destroyed.

Hicks said some crews already helping with blazes were being redirected because "there are fires everywhere."

"We’ve got fires breaking out where they’ve already been put out," he said.

Tricia Smith, who fled her home in Midwest City, said the fire engulfed parts of her neighborhood.

"We thought we were safe, but in 30 minutes the fire went everywhere," she said.

Near Lindsay, about 55 miles south of Oklahoma City, 12 homes were destroyed and 20 others were being threatened, said Eric Johnson, city manager in nearby Purcell. At least six homes and one church were destroyed in Carter County, and the number of destroyed properties was expected to rise, said Chester Agan, county assistant emergency management director.

In Texas, firefighters near the Oklahoma state line battled a nearly 8-square-mile wildfire near Electra that destroyed two commercial buildings, according to the Texas Forest Service. About 800 people were evacuated but were allowed to return by evening as the fire was contained, authorities said.