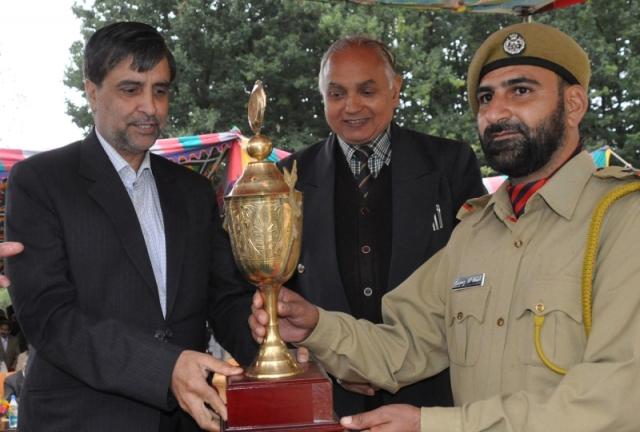 , October 21 (Scoop News) – Stressing for the need for preservation and development of the Forests in the State, the Minister for Forests, Environment and Ecology Mian Altaf Ahmed said that government has taken up various measures for the rehabilitation of degraded forests and curbing the menace of smuggling in the state. He said forests play vital role to improve the states economy and the government is committed for their development and protection.

Addressing a function organised in connection with CENTENARY YEAR celebration  and 54th passing out parade of Kashmir Forest Training school Chatternar Bandipora last, the Minister urged for providing timber to the deserving consumers in the state saying that government would full fill the requirements of the people but their would be no compromise with smuglars and encroachers on the forest land. He appreciated the people for helping to check efforts smuggling of timber and remove encroachment from the forest land.

The Minister said that Forest Division Bandipora has provided over 90,000 cft of timber worth Rs 1.63 crore to the deserving consumers of the district Bandipora, during last financial year while as the division has arranged nearly one lakh cft of timber for distribution in the district during this fiscal.

The Minister said that government has constituted a high level committee to examine all the possibilities for up-gradation of the Forest Training School Chaitternar to the level of college. He said necessary training is must for the filed staff of the Forest Department for preservation of Forests and efforts are on to strengthen the training institutions of the department in the state. He asked the outgoing trained staff to work with dedication and honesty for the protection of green gold in the state.

The Minister said that states tourist industry mostly depends on Forests and it is duty of every citizen of the state to play their row for the preservation of Forests. He said Central government has approved Rs 386 crore massive project for the development and preservation of Asia’s adding that modalities for the implementation of the mega project are being worked out. The project is expected to improve the socio economic condition of the people living across the lake in Bandipora and Sonawari areas. All the adjacent area of the lake would be developed as  tourist destinations.

As many as 31 foresters and forest guards who passed the basic Forestry Training were given certificates and momentos by the Minister.

The school has completed 100 years of Forestry Training in state and is celebrating year 2011 as Centenary year.

The Minister later unveiled the Centenary Memorail  raised in the premises of School complex under the shadows of a Kail tree planted hundred years back by the founder of the school then CCF . W.H. Covegrove.