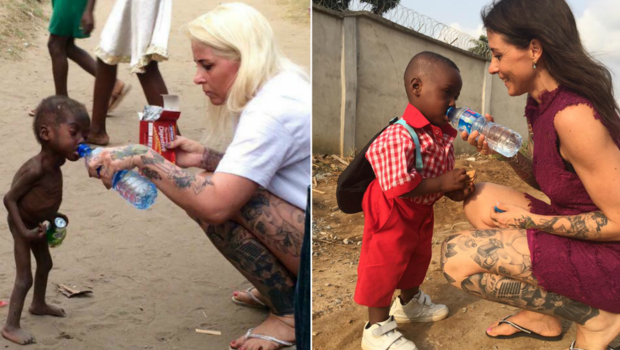 Not more than an year ago, Danish human right activist Anja Ringgren Lovén and her husband started a mission to rescue thousands of children branded of being a witch.

The poster boy of the cause, whom Loven now calls ‘Hope’ was visibly fragile. Starving for weeks, the child was probably on the verge of being perished. However, the help now only saved his life and made him healthier, the kids now goes to school. This promises a better future for him and others of his like.

The story behind naming the child Hope, as described by Loven is, “I chose to call him Hope, because right now, we’re all hoping that he survives. [He was] in a village, naked, alone and almost dead.”

Then she shared a photo of her giving water to Hope and the picture became viral. This helped in crowd funding for the program. She declared of the success on her Facbook page.

Filed under: News, World
Share Tweet Pin G Plus Email
previous article: Diluted Ammonia: The Largest Russian Chemical Plant Stolen from Workers
next article: The Instigator of the ‘Theft of the Century’ from the budget in Moldova Vlad Plahotniuc remains at liberty