Several mayors and representatives in attendance delivered the statement of support to Mrs. Maryam Rajavi, the president-elect of the Iranian Resistance.

Several mayors and representatives in attendance delivered the statement of support to Mrs. Maryam Rajavi, the president-elect of the Iranian Resistance.

In their statement, the mayors noted sharp rise in human rights violations in Iran since the election of ‘moderate’ president Hassan Rouhani last year.

They added that Iran’s warmongering in the region and its secret nuclear program were both matters of ‘major concern’ for France.

The also condemned the September 1, 2013 attack on Camp Ashraf by Iraqi forces at the behest of the Iranian regime and said the West’s inaction and silence over this crime paves the way for further atrocities.

The mayors called on the French government, the European Union and the UN to adopt immediate measures to stop the mass and arbitrary executions in Iran, to secu

re release of seven Ashraf hostages, to conduct an inquiry into the Ashraf massacre and to provide protection for 3,000 members of the Iranian opposition in Camp Liberty, Iraq.

At the conference, Mrs. Rajavi urged the West against weakness in the nuclear talks and in the implementation of the Geneva agreement, and called for an approach that would compel the mullahs to permanently shut down all their nuclear sites. 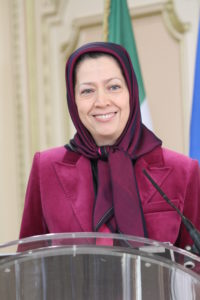 She said, “The West should not ignore freedom, human rights, and the Iranian Resistance under the pretext of nuclear negotiations.”

Mrs. Rajavi noted that the September 1 massacre of Ashraf residents and repeated missile attacks on Camp Liberty demonstrated the regime’s fear of a link between the organized resistance and popular protests. She stressed, “France has the capacity to take these issues to the Security Council. It can also demand that Liberty residents be put under international protection until resettlement and that an independent investigation be carried out into the September 1 massacre at Ashraf.”

Filed under: News, World
Share Tweet Pin G Plus Email
previous article: Mental Health Overhaul
next article: How terrorists and spies are adapting their communications methods to outwit the NSA