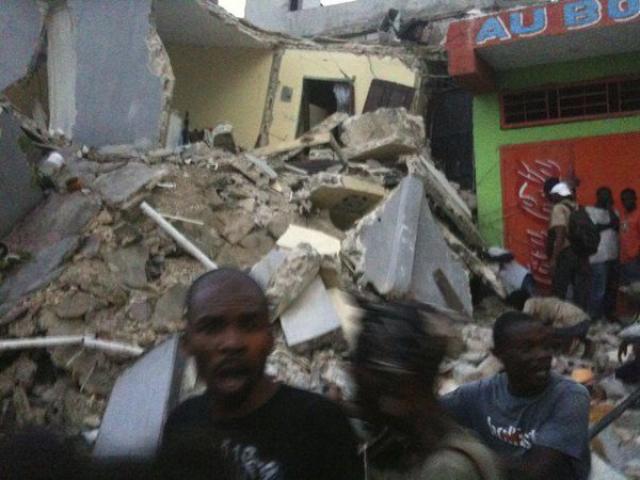 As a result of the catastrophic 7.0 earthquake that hit the island this evening (January 12), “Haiti” is currently a trending topic on Twitter. Among the mass of retweets of mainstream media reports and tweets sending prayers and good wishes to the Caribbean island, have been eyewitness reports from musician and hotelier Richard Morse, who tweets as @RAMHaiti. Morse posted his initial tweet around 6:00pm Haiti time, reporting that:

were ok at the oloffson [the hotel he runs] ..internet is on !! no phones ! hope all are okay..alot of big building in PAP [Port-au-Prince, Haiti’s capital city] are down !

A series of tweets sent an hour later reported:

Just about all the lights are out in Port au Prince.. people still screaming but the noise is dying as darkness sets.

lot’s of rumors about which buildings were toppled..The Castel Haiti behind the Oloffson is a pile of rubble..it was 8 stories high

Our guests are sitting out in the driveway.. no serious damage here at the Oloffson but many large buildings nearby have collapsed

I’m told that parts of the Palace have collapsed..the UNIBANK here on Rue Capois has collapsed

people are bringing people by on stretchers

Port au Prince is dark except for a few fires

cars are starting to circulate..I see lights in the distance towards the wharf

Phones are starting to work..got a call from some one who’s house fell in, child is hurt but ok. .A few people showing up @ Oloffson..roads are blocked by falling walls..much destruction on Grand Rue. I hear hospital General has collapsed

another aftershock..people are screaming and freaking out down towards the stadium..much singing and praying in large numbers

Also proliferating on Twitter are citizen photos of the destruction such as the ones below, reportedly sent to Twitter user @marvinady by journalist Carel Pedre of Haiti’s Radio One. @LisandroSuero has also posted photos of the destruction, including the one below: