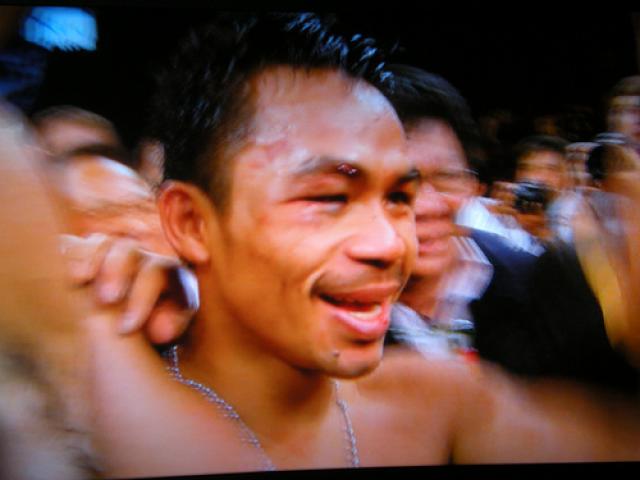 As the Philippines’ most popular international boxer Manny ‘Pacman’ Pacquiao, a native of General Santos City and now a resident of Sarangani Province in Mindanao, snatched another world boxing belt by knocking down British boxer Ricky Hatton in the first and third rounds last night at the MGM Casino in Las Vegas, some people have never stopped saying mixed comments against the famed Filipino boxer.

Oh, yes, it cannot be denied that even former known boxers have all praises for the Filipino boxer who has already five belts in various weights under his name. But there’s a select few who can’t seem to figure out what to say and what not to say in public. Perhaps, some people think that the "pen is always mightier than the sword." I don’t think it is always like that. But to me, abuse of the freedom of the press is something else. And I couldn’t wait to say that it could be misconstrued as a hatred for someone who they want to berate, which is tantamount to character assassination, because of race, culture and the color of their skin.

Manny Pacquiao, the first ever Filipino boxer considered by the boxing world as the best pound-for-pound boxer the Philippines has ever produced. Yet, his being a crowd drawer in the gambling capital of the world has not only catapulted Las Vegas’ revenues during his series of fights, but has also increased tourism influx into the Strip. Readers may ask why I’m unleashing all these things now. I’m sure of myself why I had to do it this way because for me there is no other tangible way to make some people feel that they are wrong in their comments about the Philippine boxing icon.

Let us admit that former boxer Oscar dela Hoya, now a bigtime boxing promoter, should not be compared to Manny Pacquiao in so far as popularity is concerned. Of course, I agree to that considering that Oscar dela Hoya was American-born of Mexican origin while Pacquiao is purely a full-blooded Filipino in heart and  mind. No argument about that. But what is unacceptable is how some sports writers belittle the Filipino boxing idol in some ways.

I don’t know if Robert Morales, a staff writer with Daily Breeze, is aware of what he’s talking about when he wrote in his May Ist news story titled "His Own Man" that Pacquiao has much less pay-per-view compared to what Oscar dela Hoya had done in his previous fights. What is so disgusting was when he further said:  "And there is a language barrier, Pacquiao is fluent in Tagalog, but not in English. Yet he insists on doing all of his interviews in English. His answers are therefore short and lacking in pizazz."

But let me tell Mr. Morales something. It is public knowledge that Pacquiao was born and raised in one of the remote towns in Mindanao before he became known internationally. And the language he learned and heard since that time are the Cebuano dialect and tagalog language which is taught in the early years of schooling in the Philippines. But for someone to question Pacquiao’s literacy and culture is a stupid thing a man can do to a soft-spoken and mild-mannered person like Pacquiao, who has helped a lot of people more than any Filipino or foreign boxers have ever done in their own countries.

And it’s so funny that a foreign sports writer could ridicule a person just because he couldn’t speak English flawlessly like what the native English speakers do. Filipinos are still lucky that despite  being an Asian country, who was dominated by the Spaniards for more than 400 years, majority of the Filipinos could still speak and write English well. Do they think other native nationalities can emulate what the Filipinos can do in so far as understanding the English language is concerned? Doubt it.