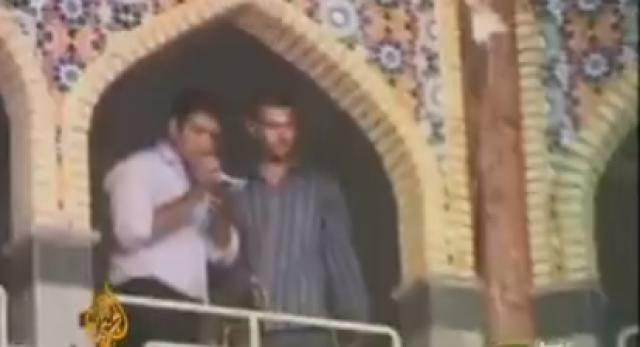 An explosion occurred on Thursday, at the Ali Ibn-Abitaleb mosque, the second largest Shiite mosque in Zahedan in Iran. At least 25 people were killed. Three men accused of being involved in the mosque bombing were hanged on Saturday morning. A Sunni militant group called Jundullah, meaning God’s Brigade, took responsibility for the attack on its website and said it was a suicide bombing.

The Iranian government is accusing the United States of being involved in the bombing operation. American officials deny it. After the explosion Zahedan spiraled into chaos and Shi’ite and Sunni populations were reportedly involved in violence. You can see a summary of what happened in the following video:

Pardeh protested against the hanging of three people just 48 hours after the explosion. The blogger says these people should be tried in a court for war criminals, and that a terrorist act should not be an excuse for the government to violate international or national laws.

Amin Sabeti, a Zahedan based blogger, has published several photos of victims of the mosque explosion and asks, “Mr. Terrorist what is our sin to become sacrificed for your ideas?”

Bamdadi has and republished Syed Saleem Shahzad’s article in Asia Times where he talks about al-Qaeda’s alliance with the Iranian group Jundullah.

This article was originally published by Global Voices.